Michael Chrichton's Runaway is a film I'm currently head-over-heels in love with right now. I remember it as a kid and teenager, playing randomly on HBO or Cinemax back in the day, and probably watching it on home video as well. I remember it was a slick looking film that was set in the not-too-distant-future with some cool spider robots and Gene Simmons playing the villain. And that's all I really took away from it all those years ago until I revisited it this past April, only to fall punch-drunk in love with it. I was going through a big 80's thriller run and this one ended up being one of the best in the bunch. 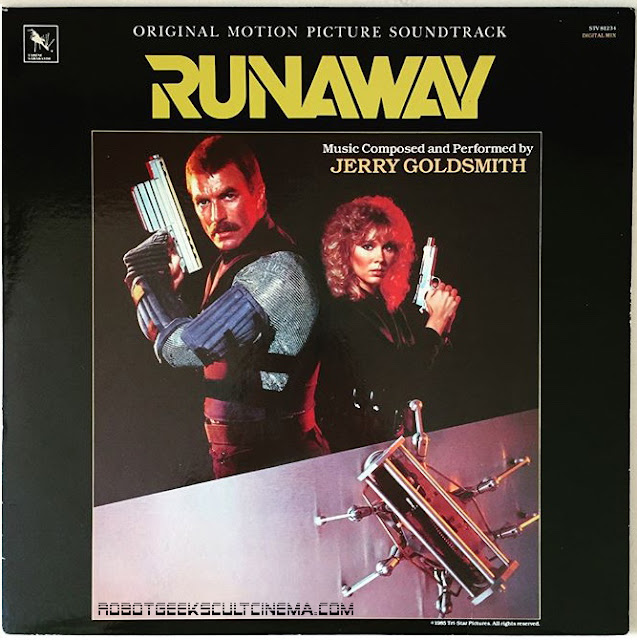 One of the things I noticed during this revisit was it's synth score. How could I not? It's fantastic. What surprised me though was that in our current "80's synth resurgence", while everyone is rightfully praising John Carpenter's many brilliant scores, and hell, even Chuck Cirino's fun Chopping Mall score, I'm surprised that this one never gets mentioned. It's just as good as any of those, if not better. And if I'm not mistaken, this may even be Jerry Goldsmith's first synth score, which is surprising because it's so fucking good. Each track is great, which is rare because there's always a good track or two that kind of ruin the whole theme. And there was one here, or so I thought. It started slow, like a love song. But just as I thought "Ok, here's that one slow track that I will probably skip over", it changed midway and turned into another one of Goldsmith's killer electronic tunes. I was wrong. This entire album is awesome. Not a single bad seed in the bunch. It reminded me a lot of the original Tron score in fact, except it's better. I wish this was the score to Tron (my favorite film by the way), because while I like Wendy Carlos' score, I don't love it. I always felt it could have been stronger, and if they were to ever update it, this would be the most perfect score they could replace it with. 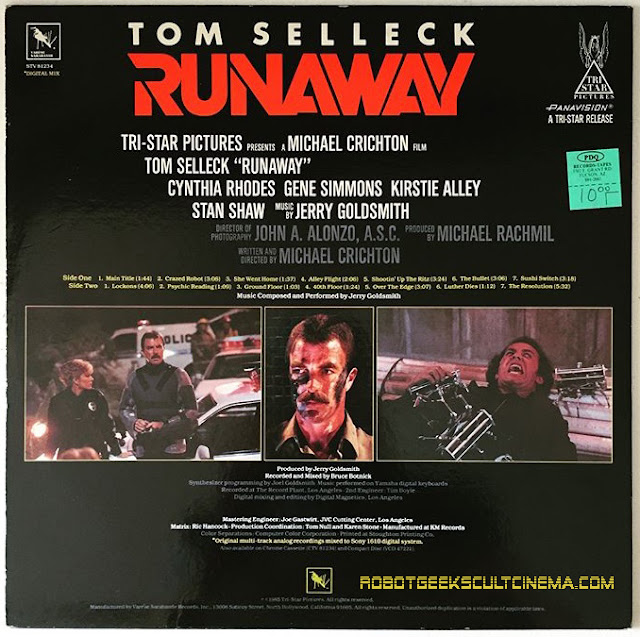 You can pick this up on cassette tape, CD and vinyl from a number of online retailers. It's not always cheap though, oftentimes running a bit high, but not insanely high. If you're a soundtrack collector, it's worth the price because it's a great synth score.
Posted by robotGEEK at 9:03 AM