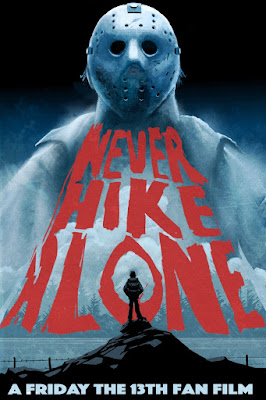 We can all agree that most horror franchises lose a fair amount of steam at some point. Michael, Leatherface, Pinhead and Freddy all suffered from too many bad sequels, and Jason is no exception. Honestly, the last great Friday the 13th film was Part 6: Jason Lives.....31 years ago. Sure, people tend to love some of the others that followed for various reasons, but most certainly not because they're great horror films. Enter writer/director/actor Vincente DiSanti, who spearheaded a Kickstarter campaign in 2016 to fund an originally estimated short 22 minute fan-film. With an enticing teaser trailer and kickass incentives, it's no surprise that they surpassed their goals, which might explain why it turned into a 55 minute film rather than the original 22. Anyway, here we are in October of 2017, with the film brilliantly being released for FREE all over the world on.....wait for it......Friday the 13th! Amazing. Let's dig in.

An avid back country hiker and vlogger, Kyle McLeod, is out hiking on a solo trip when he stumbles upon a deserted camp. He soon discovers that this camp has a brutal history and worse yet, he might not be alone.

Never Hike Alone is hands-down one of the best Friday the 13th films ever made. DiSanti and his crew took all of the fundamental elements that made the franchise so great in the first place and puts a fresh spin on it by incorporating the found footage narrative. But wait! Before you roll your eyes, hear me out. I personally can't stand found footage films. I find them lazy. But the way DiSanti incorporates it into Never Hike Alone works brilliantly. It's only a small tool, and thankfully, most of the film is shot traditionally. Even so, the found footage angle is still done surprisingly well, in that it's not shaky-cam nonsense, which was entirely refreshing. And that's another thing I found surprising here. The film itself is visually impressive. In fact, if you were to judge it purely on the camerawork alone, it's a better looking film than any of the last 6 in the franchise, including Freddy VS Jason. But that's just me. On a technical level, it delivers the goods in every single department; from the sound editing, the score, the effects, the stunts and most importantly, the editing. It's a trim 55 minutes that never overstays it's welcome, and utilizes every second to help push the film further along at a brisk pace.

On a narrative front, the film packs a punch. While the first half does a good job of setting things up in a timely manner, it's really the second half that delivers the slasher goods, and boy you're in for a treat. Every creative and technical decision DiSanti and his crew make bring the film to life in such a startlingly frightening way, that it makes you wonder why filmmakers today can't make films like this anymore. He doesn't bring anything new to the table, other than the found footage angle, but uses the typical slasher tropes to full effect, and in some instances, enhancing certain elements for a much more visceral experience. I don't want to give too much away before you've actually seen it, but needless to say, Vincente DiSanti did his homework. For example, every single time Jason (DiSanti) took a step, it sounded like a giant dinosaur was walking the Earth. You felt every single step. And that brings me to DiSanti's portrayal of Jason. He does a phenomenal job. The guy is big, and he takes on the role with gusto. I'd have to say it's probably one of my favorite Jason's after C.J. Graham in Part 6: Jason Lives. Fuck Kane Hodder. The makeup department also needs to be commended. I loved Jason's "look" in this. Traditional, yet cleaner. Again, it's more in tune with his look in Part 6 than say his zombie-look in Part 7 and 8. 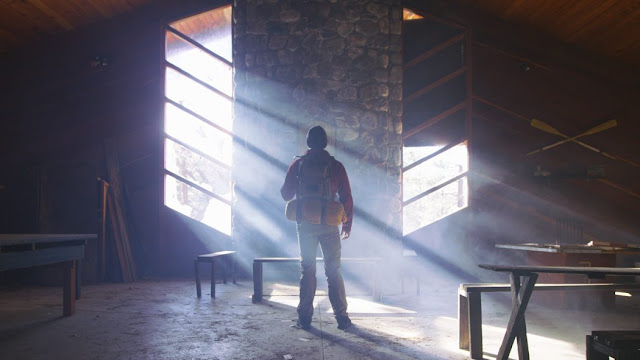 If you've been missing a good traditional slasher, then Never Hike Alone will surely fill that sweet spot. The film was filled with nonstop surprises for me. It's so good in fact that you'll want more. You'll wish they were able to stretch it out for an extra half hour, but trust me when I say that it's a strong 55 minutes and just as long as it needs to be. And wait till you see the surprise at the end. I couldn't believe it. Such a.....awe hell. I'll just let you experience it for yourself. Just a great bombshell in an already great experience. I think you'll be pleasantly surprised at how good this little crowd-sourced film is compared to big budget studio films in general. Only, it's not just good.....it's fucking GREAT!!

Check out the full movie below:

Posted by robotGEEK at 9:15 AM