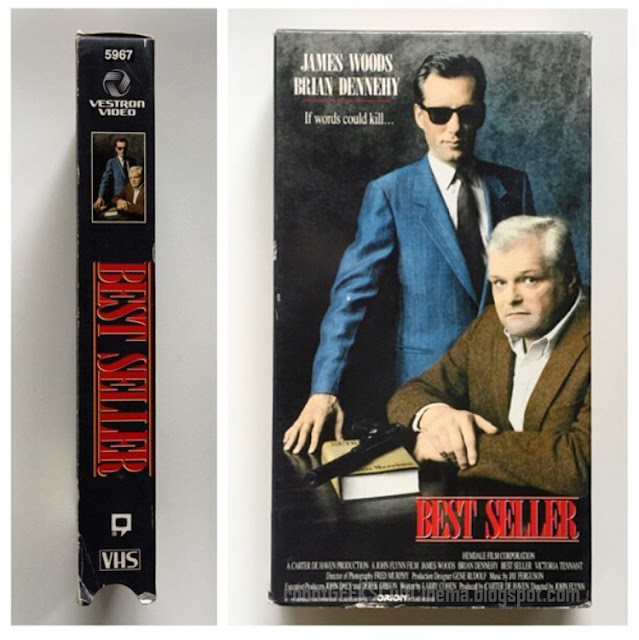 My little town is notoriously skimpy when it comes to good VHS finds at our local thrift stores. Most of the time, there just aren't any good finds, which is pretty sad. But every once in a while, I'll come across one that I think will be halfway decent, only to discover that it's so much better than I anticipated. These are the kinds of film experiences I thrive on, that I live for, and Best Seller was that kind of experience, a film that just took me completely by surprise. I've always loved the cover, it's a nice reminder of when actors actually showed up to take a photo for a movie poster, as opposed to the photoshop messes we get today. It's a cool image for sure, but the film still could have gone either way. Luckily, it ended up being awesome for all the right reasons.

Cleve (James Woods) is a hitman who reaches out to Dennis (Brian Dennehy), a cop and author, with an idea for a new book, the story of Cleve and his life as a hitman. Dennis, skeptical and weary from the beginning, and Cleve travel the country gathering evidence and facts for the book, all the while a powerful former client of Cleve's will stop at nothing to prevent it from ever seeing the light of day. 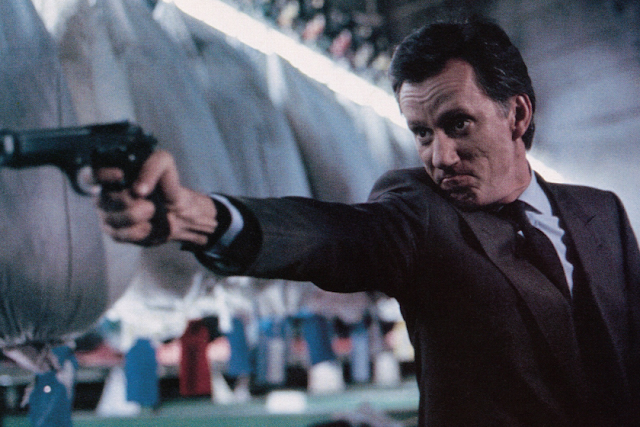 Powerhouse performances. First and foremost, the film is only as strong as it is for 2 important reasons; James Woods and Brian Dennehy. It's as if this film, and better yet the script, was specifically written with them in mind. They're just fantastic in this, both bringing their very unique brand of tough-guy machismo to their roles. It's perfect casting if there ever was such a thing.

Mid 80's grittiness brought to life. John Flynn's impeccable direction serves the film extremely well, and after seeing this, it's no surprise he would follow this up with films like Stallone's Lock Up and Seagal's Out for Justice. His particular brand of gritty gives the film an overall sense of dread and bravado, almost as if the film's style serves as another character of the film. Even watching this in full frame on VHS didn't take away from it's visual impact.

Razor sharp intensity. Genre writer/director Larry Cohen (Maniac Cop, Q: The Winged Serpent, It's Alive) writes the film as he's writing a hard-boiled detective novel. It's a detective story in a sense, but a different one altogether. Instead of a cop investigating a series of crimes or murders, you have a cop/author who's investigating a supposed hitman and his past deeds to basically call bullshit to his claims of high profile murders, yet Cohen plots the film in such a way that it feels like you're watching an old school detective thriller about a cop tracking down a serial killer. It's brilliant and intensely effective.

The score packs a punch. Jay Ferguson delivers one helluva brilliant synth score for a film who's score would normally be the last thing you would notice. But much like John Flynn's direction, Ferguson's score serves as yet another character to the film, giving it a moody atmosphere that screams 80's synth, but in the best possible way. I loved it so much in fact that I immediately set out to try and track it down, only to discover that it may never have even gotten an official release as a soundtrack. I could be wrong though, and if I am, please feel free to correct me. I need this soundtrack in my life, because it's that good. HELP!

There is no bad. Much like my experience watching Shoot to Kill, this is another solid example of the perfect 80's thriller. I didn't find a single thing I would change with this film. Every single aspect, from the direction, the script, the performances, the action, the score, were all essential in creating a truly riveting film experience with an insatiably satisfying climax. It also drives home one thing I was already almost positive about, and that's that James Woods is a badass.
Posted by robotGEEK at 11:57 AM