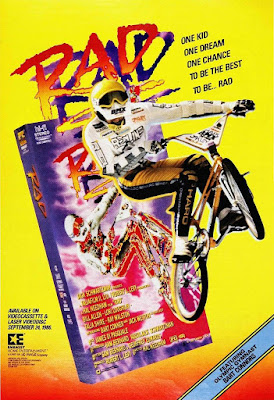 Don't ask me how, or why, but somehow I never got around to seeing Rad growing up. Though it was a staple of any youth who grew up riding BMX bikes in the 80's, like I did, I just never got around to watching this. Flash forward exactly 30 years and here I am, throwing in a bootleg VHS copy I acquired from a fellow collector forever ago that's been sitting on my shelf ever since. My wife and I were in the mood for something cheesy, and 80's, and I thought what better time to finally give this one a try.

Words cannot express the sheer joy I had watching this insanely entertaining flick. I now understand it's huge cult status. Every time this film is brought up, everyone I ever mention it to immediately says they love it. I fully understand the appeal, and it's legendary status is indeed warranted. Rad is arguably one of the most entertaining 80's flicks I've ever seen. Every single frame just oozes bright neon colors, bad fashion, insane hair cuts, and a pure 80's aesthetic that puts a huge smile on your face.

A pro BMX team comes into town at the heels of a huge BMX event, repeatedly referred to as the biggest BMX race in the entire world. I don't know about that, but it's apparently a big deal. One of the team members, Lori Loughlin of Full House fame, catches the eye of the local BMX wonder-kid. When a romance blossoms between them, the pro's resort to bully tactics to prevent him from entering the race.

It's the same old story, with not a hint of originality brought to the table. But hey, it doesn't have to. It's as basic and cliche a story as you could possibly get, and that is one of it's best assets. Without having to do anything original, it can concentrate on doing what it does best, and that's delivering a plethora of nostalgia.

Most don't realize this, but this just so happens to be directed by legendary stuntman and coordinator Hal Needham, who helmed a ton of classics before this like Smokey and the Bandit I & II, Cannonball Run I & II, and Megaforce. You'd never guess by watching this though; this just seems like such an odd choice for a director with his history. I will give him props though, while not the most interesting visual director, he makes the most out of what he has and there are some great sequences that only benefited from his specific style. 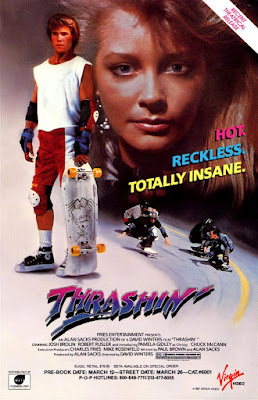 Unlike Rad, this film I did in fact see, and quite often I might add. Because of a physical disability, I was never able to skate, but that didn't stop me from thoroughly enjoying this heavenly slice of 80's cheese. Interestingly enough though, I haven't seen it since the day of VHS. More than likely, probably since it's initial home video release. That's a long time. We're talking 30 years. So in those 3 decades that have since passed, I've forgotten everything about this other than it starred a young Josh Brolin, fresh off his stint in The Goonies the year before.

A young skater from the valley falls in love with the sister of a rival skate gang. That's really the synopsis in a nutshell. Sure other things happen, but that's really the meat of the story, and honestly, it couldn't be anymore cliche'd if it tried. As I was watching this, and enjoying every single second of it, we were accurately predicting exactly what would happen and what the lines of dialogue would be from time to time, and we were spot on every time. That's how predictable this film is from beginning to end. It's a tired formula, but put into the context of the skateboard world circa 1986, it's just fucking gold. There's no other way to describe it.

Next to how fun and entertaining this was, the thing that surprised and impressed me the most was the casting. Like I said, I didn't remember anything about this so I completely forgot who was in this. So you can imagine my surprise at the notable faces I kept seeing pop up. For starters, you've got some true skateboarding legends either doing the stuntwork, or sporting minor supporting roles. But then you've got Brooke McCarter, who played Paul, the blonde vampire from Lost Boys. I couldn't believe it. Though this film was made only a year before Lost Boys, he looks so much younger and it took me a while to realize who he was. Sherilyn Fenn was another surprise. She's not listed anywhere in the promotional stuff, yet here she is as the girlfriend of the main bad guy looking great as ever. She would later go on to costar in The Wraith the very same year.

Robert Russler. That name might not ring a bell, but his face certainly will. In 1985, he played Max in Weird Science, and then Ron Grady in A Nightmare on Elm St. 2: Freddy's Revenge that same year. He's been working steadily since then, but those are the two films that he will most be identified with. Here he plays the leader of the rival skate gang, The Dagger's. He was inspired casting to say the least. I mean, he really does make the most of the villain role. Tacky rat tail and all.

Thrashin' hit all the right notes. While it was made the same year as Rad, it couldn't be anymore different. Where Rad was more clean edge, sugar coated with bright colors and a wholesomeness to it, Thrashin' goes completely the other direction and offers the same kind of fun, only in a more gritty, dirty and sweaty environment. If I was forced to choose which one I preferred though, I don't think I could. I like the both equally for different reasons. Yet, aside from the things that make them both unique from one another, they're both pure 80's nostalgic cheese head to toe. You couldn't ask for two more different, yet equally entertaining pieces of celluloid trash.
Posted by robotGEEK at 10:43 AM