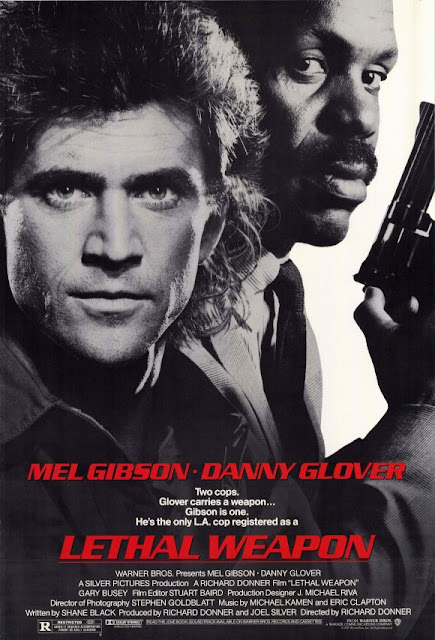 Man, I really wish I was the age I am now back in the mid to late 80's. This was my most favorite era of "Badass Cinema". Lethal Weapon, Black Rain, Die Hard, Action Jackson, Tango & Cash, Predator, these were all films released in this incredible era that defined the way action films were made, resulting in an amazing selection of copy cats left and right. But this was the era man, the era of the action film.

By now, especially if you're an action fan, you've probably seen Lethal Weapon and even maybe it's sequels at least a dozen times or so. Even when they show it on cable, I never change the channel. It's just one of those films that even whether you love or hate Richard Donner at the helm, it's an impeccably written hard-edged action film. You also have to remember, this one has the least amount of comedy and the most amount of action compared to it's 3 sequels. Speaking of Donner, just like with most people when this first came out, I was shocked he was behind the camera for this one. Nothing he did beforehand suggested he could handle a film of this genre, but despite a few scenes that just didn't work for me, he pulls it off pretty damn well, giving it the most gritty look and feel out of the entire series. But that might also have to do with "when" this film was made, because it certainly has that 80's action film look. Yea, Part 2 was technically an 80's entry also (1989 to be exact), but had such a different look and feel to me compared to this one. It had a more polished look to it, but less stylized than this one.

Newly paired mismatched partners Riggs (Mel Gibson) and Murtaugh (Danny Glover) are working there first case together. Riggs is suicidal and maybe even crazy, but get's the job done. Murtaugh is older, wiser, more experienced and a lot less willing to put his life on the line for the job. What initially seems to be the death of a prostitute as a result of an overdose quickly turns into a much bigger case of illegal drug smuggling at the hands of a hard hitting and major drug ring.

I remember when this first came out and how huge it was. An action fans dream. Screenwriter Shane Black seemed to come out of nowhere to deliver this hard hitting detective film full of action and wit, the same year another one of his screenplays was turned into a film in the form of 80's cult classic The Monster Squad, another one of my favorites. This was 1987, before the internet hit. I remember reading in every movie magazine I could get my hands on back then how he was the talk of the town and with every other film that he wrote after this, only got bigger and bigger paychecks with The Last Boy Scout and The Long Kiss Goodnight. Up until that point no screenplay had ever been sold for the kind of figures he got for those two films. Unfortunately, as much as I love both of those films, they didn't produce the numbers at the box office to justify those paychecks. It wasn't until 2005's awesome and highly enjoyable Kiss Kiss Bang Bang that he made another impression leading into next years Iron Man 3, which he's been hired to write and direct. I can't wait for that one for two reasons. One, I feel Black can deliver a solid action film, and two, I felt the severely rushed Iron Man 2 let a lot of us Iron Man fans down for many reasons.

One of the best things about Lethal Weapon is that no matter how many times you've seen it before, it "never" loses it's entertainment value. For a hard-edged gritty detective thriller, it's as good as it gets. Sure, I might not agree with some of Donner's stylistic choices here and there, but for the most part he keeps the action clean and the look of the film consistent. I still can't help but think how the rest of the series would have turned out with someone else at the helm, like a different director for each picture. I think that was a hugely missed opportunity on the studio's part. I know, I know. Lethal Weapon was a monster hit so naturally they'd keep going the same route and not fuck up the magic, but just imagine a different talent behind the camera for every entry, like the Alien series. That could have been amazing. Not to say the rest of the series doesn't have anything to offer. I actually love every single one of them for various reasons, just not as much as this one. Like with part 2, you'll immediately notice they've upped the comedy right from the opening sequence (not to mention the casting of Joe Pesci), and maybe a little more so with each entry after. But they still deliver tremendously with the action and entertainment value with part 3 being my favorite after the original. I mean, like it or not, the series redefined the cop buddy movie.

Who would have ever thought that Danny Glover would costar in one of the biggest action franchises in the last 30 years? But then again, I never thought he'd star in a Predator sequel either. Because you know, when thinking of an Arnold Schwarzenegger replacement for an action/sci-fi sequel your mind automatically goes to Danny Glover. But it's really Mel Gibson's portrayal of Martin Riggs who really makes the film. Ok, so he's had a questionable reputation these past 10 years but shit man, this is Mad fuckin' Max we're talking about. He owns this series! And who else can rock a serious mullet like Detective Martin Riggs?! Speaking of which, did the filmmakers think that we wouldn't notice that his hair is clearly gray in this first one and jet black by the time part 4 came around? Who are they kidding!? Gary Busey was also really fun in this as the albino henchman Joshua. Big, intimidating and such a badass in here it makes me forget how crazy he's become recently.

If you've never seen the "Director's Cut", I would strongly suggest you do so. It's not going to change the way you feel about the movie or anything, but seeing new sequences integrated back into the film gives you a pretty good look at how hard it can be for the filmmakers to put a film together and have to painfully leave a lot of it on the cutting room floor. We all know how when we're introduced to Riggs right? He's doing a drug bust at a Christmas tree stand when it all goes to hell. This is where the filmmakers want to introduce us to Riggs and to show us right off the bat that this guy might be slightly insane. It was a good way to introduce the viewer to this character and more importantly, to show us he has a death wish. But in the "Director's Cut", the first time we're introduced to Riggs is when he shows up at an elementary school where a gunman has taken shelter by a second floor window with a rifle picking people off one by one. Riggs, obviously not caring whether he lives or dies, walks right into the line of fire out in the open and unloads a clip bringing the gunman down from a distance. It was a cool introduction and a lot more brutal than the drug bust sequence, but I think the film works better with that drug bust sequence in introducing us to Martin Riggs. Both show us that he could care less if he lived or died, but watching him have a bonafide freakout with a suspect, almost nearly blowing his head off was so cool to see. But with that "Mr. Sniper Sir" sequence, it shows us he's one helluva shot.

You can check out that sequence here:

If Lethal Weapon has proven anything, it's that it has withstood the test of time. It single handedly revitalized a dying genre, the cop buddy movie, and set the standard for 80's action films until a year later when Die Hard was released. But that's another story.

Posted by robotGEEK at 8:58 PM