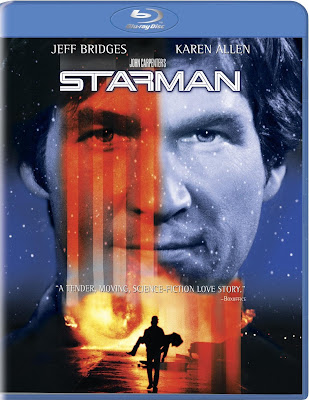 When I revisited this film a few years ago because Netflix was streaming it, I was blown away. It touched me in the way only a very few number of films have. It instantly became a favorite and since that time I've revisited it often on various formats.

Upon that first revisit a few years ago, I was struck by how amazing it looked under the direction of John Carpenter. I say this because of his entire filmography, this film is never mentioned as one of is best, which I would beg to differ. To me, this easily qualifies as one of his strongest films, and dare I say his most visually brilliant, and I consider myself a HUGE fan of Carpenter. Most of his films are masterpieces to me, while others are personal classics. Still, none have ever impacted me on a visual level the way this one did. I own nearly every one of his films in various formats; VHS, Laserdisc, DVD and Blu ray. Yet of all his films, there was never one that I felt I NEEDED to see in HD. That is until I saw this film, where nearly every single frame is an exquisite example of expert composition.

When I sat down to finally watch this blu ray that I purchased almost a year ago, I was once again struck by how aesthetically gorgeous this film is. If any one of his films begged a blu ray transfer, it's certainly this one. Right from the very first frame and down to it's very last, each striking image of even the most mundane scene is made all the more exquisite by Carpenter's keen eye for detail and use of extreme widescreen. It helps that he also collaborated with Cinematographer Donald M. Morgan (Excessive Force), who he worked with the year before on Christine, Aesthetically, these two seem like a match made in heaven, yet this and the former are the only 2 films they worked on together, which is surprising.

The Blu Ray:
To my knowledge, Starman has only ever gotten this one Blu Ray release here in the U.S., and based on the simple fact that this is as bare bones as they come and literally just the film by itself, it could use a serious upgrade in terms of extra content. Now, as far as the picture itself, it's stellar, beautiful, gorgeous, striking. I have never seen the film look better than it does here in 1080p HD on a 2.40:1 aspect ratio. Upon revisiting this on blu, there were things I hadn't noticed before, little details that stand out among the striking imagery and it's full widescreen ratio. And even outside of that, just seeing it in it's best presentation possible, it's like watching it on a whole new level. The blacks are a rich dark black, and the colors pop in a vivid intensity. It wasn't until watching it on Blu Ray that I noticed how striking the colors were, and how orchestrated the color schemes were throughout.

Sadly, there are zero extra's on here, not even a trailer or a commentary. What you get is the film at it's most striking, but nothing else, which is a shame because I'm sure there are plenty of bits of information behind-the-scenes that would make for a great documentary. For example, as I was watching the end credits roll up, I noticed the 1st Assistant Director was Larry Franco, Carpenter's longtime Producer, and apparently also his longtime Assistant Director, which I was not even aware of. And then there was the "Starman Transformation by Dick Smith, Stan Winston and Rick Baker" credit that literally blew me away. I mean, talk about an incredible trifecta of talent just on that one sequence alone!

Gripes:
I've never owned Starman on DVD, which has been released multiple times on that format as either a standalone release or as part of a 2 or 4 pack. For all I know, there very well may be some behind-the-scenes features that are present on any one of these former releases, and if so, it's a shame they didn't include them on this Blu Ray. The lack of even a simple trailer, or an old commentary imported from an earlier DVD release is a bit frustrating. Yet, the film itself is presented in a stunning transfer, so I can't be all that upset. I'm also not a big fan of the cover art they chose, wishing instead that they just stuck with the tried and true original poster art that represents the film effectively well overall.

Conclusion:
The Starman Blu Ray will run you anywhere from $10-$20 depending on the seller, which would seem a bit steep for a bare bones release, but trust me when I tell you it's an essential addition to your Blu Ray collection, as well as a must-own John Carpenter film.
Posted by robotGEEK at 11:50 AM