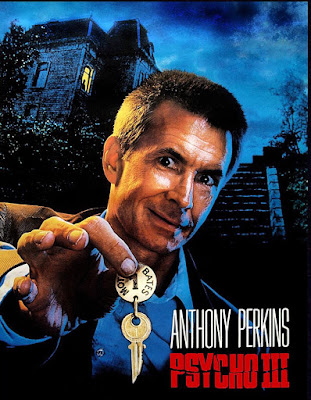 When I randomly saw Psycho II for the very first time last year, I was blown away by how great it was. In fact, I loved it more than the original, and still do. Surprisingly though, it didn't push me to go out and get the remaining sequels any faster. Here we are a full year later and I finally got my hands on a DVD set that includes Parts II, III, and IV: The Beginning.

Before digging in I did a bit of reading online and discovered that a lot of people generally really like this one because it resembles more of a slasher, and as such, ends up being more gory than you'd expect. It's also the only time Anthony Perkins actually directed a Psycho film, and better yet, it's his directorial debut, which would ultimately be short lived.

There are a lot of surprising aspects to Psycho III. Ultimately I liked it, but not nearly as much as I was hoping to. I think the one and only thing that really sells the film is Anthony Perkins performance. He's the anchor to the entire thing, and if we didn't have that, then the film would be pretty forgettable, which is a bit of a letdown since the previous entry, even if you had taken Perkins out of the equation, was a smartly written and expertly crafted thriller in it's own right. But this time out, Perkins stars and directed this entry himself, making it a unique film altogether. 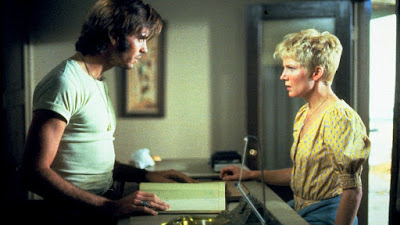 As it stands, he does a better than average job. He gives the film a bit of style, but it doesn't always flow naturally. There are a few moments where I'll admit I was impressed with his sense of style, but it ultimately get's marred by the following scene that doesn't deliver in the same way. It could be the editing, or it could be that Perkins was just trying to find his groove, in any case, it's never consistent, often jumping from inspired to uneven. Most people, when describing this one, refer to it as the full-on slasher entry, and they would be correct. It's definitely gorier than the rest, but not gory enough to actually call it gory, just when compared to the previous 2 films. And I think that's what really keeps this from being great. Had it gone further into that area it could have been a great 80's horror slasher, but it teeters on thriller and slasher, often going back and forth unnecessarily and unsuccessfully. I think if they had just bypassed the thriller angle and just gone nuts with hit with more gore, more blood, more kills and more insanity, it would easily have set itself apart from the rest, making it a wholly unique film in the Psycho franchise. But alas, as it stands, it's a marginally entertaining horror/thriller that never realizes it's full potential in any area, made passable by Anthony Perkins scene chewing role as Norman Bates, who ultimately saves the film. I'm glad I finally saw it, but it didn't floor me the way it could have, and I'll more than likely never need to revisit this one.