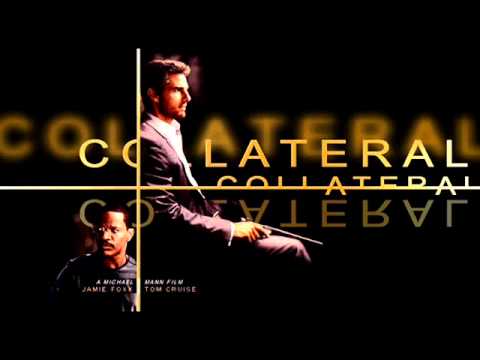 As big a fan of Michael Mann as I am, something always kept me from wanting to see this. I think it was because I knew this was the start of his shift in visual imagery, where he switched to digital cameras (at least that's what I remember seeing in a TV special, where he utilized new camera's for the entire nighttime shoot that would capture the night in a way that hadn't been done before, something film was unable to do). If you don't already know, I'm a strongly visual person and visual learner. The visual aspect to a film, for me, is one of the most important parts of my experience. It's been hard for me to like anything he's done since Heat, because anything after pale in comparison for me, to match the same kind of genius I found in films like that, Thief and Manhunter. Yet Collateral comes up often as one his best, or if it's ever mentioned, the first words out of anyone's mouth is usually "I love that movie". I figured it was time to give it a shot.

When a hitman (Tom Cruise) forces a cab driver (Jamie Foxx) to be his getaway driver for a single night while he crosses off a list of targets, both men underestimate the other resulting in a cat and mouse game of wits, courage and integrity.

I have to say, this was an awesome film. While not directly written by Mann himself, rather Stuart Beattie (30 Days of Night, GI Joe), it still carries a lot of his signature characteristics in regards to character development and dialogue. Visually, it's a slightly different approach than what I tend to like from him. Here was the beginning of his visual shift, where he would utilize more of a freestyle approach, and really, while not a fan of it, I can understand why he would adopt this with Collateral. It's an oftentimes fast moving film and I assume having to shoot the entire film in the middle of the night might have made it necessary to shoot fast and free. And really, this is my one and only real gripe about this film. I honestly feel that had Mann done some of his trademark compositions by keeping the camera steady and not using handheld, it could have been a great film, maybe even a masterpiece of crime cinema. It kind of broke my heart that it could have been, but was help back by it's lack of visual punch that we had come to expect from a master of crime thrillers.

Outside of that little area, every other aspect of the film delivers big time. The script is sharp, and the film moves along briskly, offering up ample amounts of tension and thrills. The cast is pretty solid, most notably Tom Cruise as the salt and pepper haired villain/hitman. He's so good at being a likable and charming villain that you kind of end up rooting for the guy in a totally weird way. Or was that just me? Everyone delivers in their respective roles, but it's really Cruise who shines, and he steals the show.

Between Heat (1995) and this film, Michael Mann delivered 2 drama's, The Insider and Ali, so this was a bit of a nice return to form for him, at least in the sense that people like me really love his crime thriller's more than anything. Unfortunately, I feel this was his last hurrah, because he would follow this up with the dreadful Miami Vice film, something I had high hopes for only to be severely disappointed in so many aspects of it, namely it's execution. This wasn't the Mann I was familiar with, the one who produced the original series, and who blew me away with his particular Miami influenced visual aesthetic. Miami Vice ultimately ended up being a dull, gritty handheld/shaky-cam mess. Believe me, nobody was more disappointed than I. I feel had Mann done the kind of work that made Manhunter so spectacular on a visual level, his film adaptation of his show Miami Vice could easily have been a retro cult hit, but it wasn't just the eye candy aspect that it was missing, the story itself was fairly bland, tedious and uninteresting. In fact, I can't even remember what it was about.

Collateral for me is Michael Mann's last great film. Solid performances, with Cruise nailing it as a hitman and easily delivering one of his best and most memorable, a razor sharp script with plenty of action, shootouts, chases and suspense, and some decent eye candy that doesn't quite match his early stuff, but holds up well enough compared to his films that would follow. On a sad note, I can say truthfully that I haven't like a film of his since this release 13 years ago.