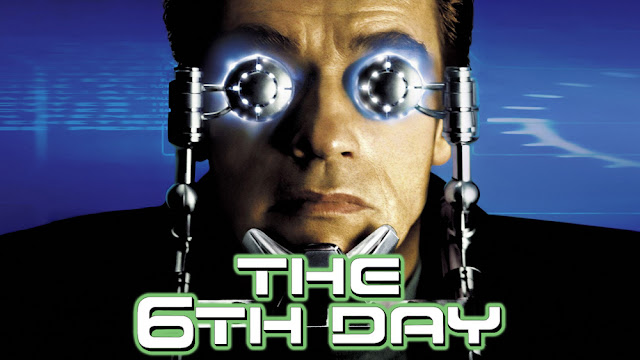 This was a film that I really had no desire to see upon it's initial release. The trailers made it look cheap and very 90's, even though it was released in 2000. While recently being completely blown away by director Roger Spottiswoode's work on both Shoot to Kill and Tomorrow Never Dies, I figured that maybe I should finally give this one a shot. That maybe there was something to it after all, something I didn't pick up on initially on the weak trailer. Or so I thought.

The truth is that The 6th Day, sadly, is an easily forgotten film. There's nothing remotely interesting or even entertaining to be found, and it's pretty much exactly what I was expecting it to be. Too bad too, because along side Arnold, the film boasts a pretty good cast (even Michael Rooker's on board as the bad guy), and Roger Spottiswoode as director should really have elevated this thing to far above average, but it's actually quite the opposite. Nothing in here has any resemblance to Spottiswoode's previous films, and the style that I had grown to love with the few films of his that I have seen, was blatantly absent. For some reason, he decided to shoot this as a TV Movie, and that's actually one of this films biggest issues. It looks cheap. I'm not just talking about the effects. Surprisingly, they were halfway decent for the most part, considering when this was made, but I mean more along the lines of how and where he pointed the camera. There are a lot of dutch angles interspersed throughout, and while I'm not against that method of shooting when it's done well, here it looks lazy and completely uninspired. It's almost like his DoP maybe was the one who insisted on it (I don't actually know), to give the film a little edge, but it only ended up doing the opposite.

I'd have to say that the one and only real bright spot in all of this is Arnold, who does a pretty good job playing duel roles. Since the film is about cloning, he ultimately ends up playing the main character, as well as the clone of that character. As you'd expect with a film released in 2000, the effects of having the same actor play two roles in the same shot hasn't really been done any better than when Jean-Claude Van Damme did it in Double Impact in 1991.

By this time, his star power and quality of his films had began to diminish, with his last significant hit being True Lies all the way back in 1994. The great projects just weren't coming in anymore, and The 6th Day is a testament to that. It's easily a film that really anyone could have starred in. None of Arnold's bravado is on display here, and the role certainly doesn't call for it either. In fact, if it hadn't starred Arnold Schwarzenegger, I'd imagine it would have ended up being a Movie-of-the-Week or a Direct-to-Video flick. It just carries that vibe.

In all honesty, I was pretty bummed. I went in with some high hopes, but the stale direction, cheap looking effects and ho-hum vibe distracted me. There just never seems to be the right talent involved in any aspect of this film's production and marketing. The mediocre trailer certainly didn't help, and then there's the bad poster and downright terrible cover artwork for all the subsequent home video releases. I'm shocked that Roger Ebert gave this Two Thumbs Up, but then again, I've never really agreed with most of his reviews.
Posted by robotGEEK at 3:49 PM