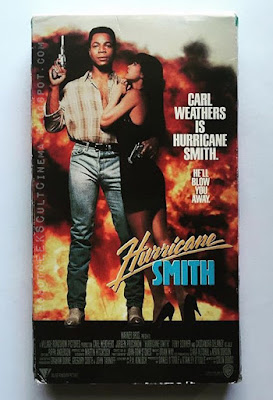 Until now, I had no idea this film even existed. I always felt that Carl Weathers deserved a better shot at being an action star, so when I see this randomly, I kind of got really excited. I thought "maybe he was bigger in the DTV circuit and I just wasn't aware?". I mean, look at that cover, and just the title alone sounds badass. I was hoping for something along the lines of Action Jackson, but in a low-budget way. Who wouldn't?!

Billy "Hurricane" Smith is in search of his sister, who has gone missing in Australia. When he heads over there to find her, he's met with resistance from the community, and discovers she may have been mixed up in a drug-smuggling and prostitution ring.

While all the right ingredients are here, Hurricane Smith, sadly, resulted in a very tame affair. In fact, there's virtually zero action until the final 30 minutes. And while the action was fairly straight forward and competent, ultimately it couldn't save this film, which is sad really because this should have been a slam dunk.

Carl Weathers really deserves better than this. He does a fine job in the lead, but he's just completely wasted in this effort. It really carries more of a Made-for-TV vibe than a low-budget action flick because of the lack of well....action. And when it comes down to how he got his nickname "Hurricane", it's nothing like you expect. I also have to admit, it's really weird seeing him without a mustache. It's so weird in fact that it's distracting. The only other notable face in here is Jurgen Prochnow, as the always reliable screaming villain. You have to admit, the guy can scream well. His work in Judge Dredd 3 years later is another solid example of that.

It's hard to get past so many of the films absurdities because had the film been at least fun, or full of action, those little things could easily have been forgiven. But being null of any sort of excitement whatsoever, you can't help but notice. For example, there are never any cops around, ever. Even during this one sequence with a car chase where the main bad guy chases down a bus full of passengers, crashes both vehicles causing them to flip over, gets out of the vehicle, turns it right side up, gets back in and continues a chase all while shooting his gun while dozens of people are crawling out of the bus. No cops anywhere. There's another scene where he's (the villain) chasing a woman through a hotel with a large butcher knife screaming that he's going to kill her, and nobody says or does anything. The film is full of moments like this and as I mentioned, could easily have been overlooked or even gone unnoticed if there was action to distract you. 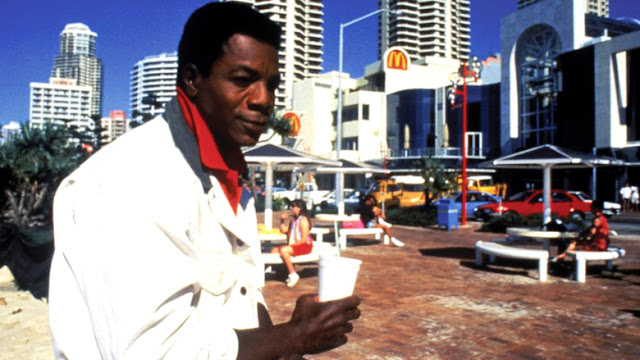 All in all, a wasted effort in my opinion. Cool title, great badass of an actor in the lead, and a very early 90's vibe that's marred by a dull script that doesn't offer up any of the things you want to see in a low-budget action film titled Hurricane Smith and starring Carl Weathers until the final act, and by then, you're kind of over it. I will say that the action, when it finally appears, was done competently well enough to be interesting. It won't blow you away or anything, but at least when it does finally show up, it's not bad. But really, Carl Weathers deserves better than this.

*Fun fact. My buddy in Germany says that this was marketed as Action Jackson 2 over there when it was released.