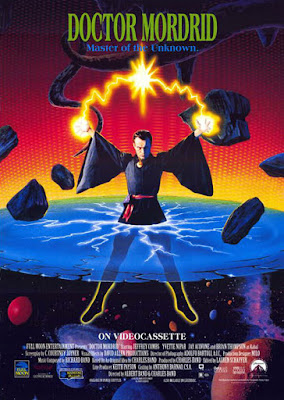 Growing up on a healthy dose of horror as a teenager in the 80's and 90's, I never really got into Full Moon the way others did. I would dip into Troma from time to time, but mainly stuck to the mainstream stuff, so I wasn't even aware that this film existed until just this past year. I soon discovered that this was intended to be a legitimate Dr. Strange adaptation until Full Moon lost the rights (back when Marvel was allowing cheap low-budget adaptations of their popular titles), proceeding anyway and creating their own ripoff version. Whether that's actually true or not, it gave me a little insight into the film going in.

What a completely pleasant surprise this was. For me, this tiny little film was able to do what Marvel's bombastic budgeted film was unable to, and that's entertain me. One of the most endearing things you'll notice immediately is that this is indeed a rather small production. So small in fact that it reminded me of an episode of a television show. But that's also one of it's greatest qualities. Because the film is so small and so intimate, not relying on a abundance of special effects or bad CGI to tell the story, rather the actors themselves and it's because of this that Doctor Mordrid is as great as it its.

Let's begin with Jeffrey Combs, who soars and excels as the Doctor. His performance as the titular Mordrid is really the biggest plus that makes this film as entertaining as it is. His intensity, even in the most mundane scenes, is oftentimes hilarious and mesmerizing at the same time. Combs sells the shit out of it, and it makes me wonder how great he would have done in the role of Dr. Strange. One of the other highlights of this film is none other than cult cinema icon Brian Thompson as the villain Kabal, another mystical sorcerer who chooses to use his powers for evil. Aside from Combs, Thompson is another reason that this film works as well as it does. His peculiar accent and mannerisms help give the character of Kabal a much more memorable presence, and it's hilariously cheesy awesome.

Like I mentioned before, the scale of this film and it's story is so small that it looks and feels like an episode of a tv show, but that doesn't make it any less entertaining. Quite the contrary. It was a highly enjoyable experience and exactly what we were needing after spending the day watching a few duds. Could it have been better? Sure. Was it bad? Hell no! But what blows my mind is that I found it far more entertaining than the film I just saw in theaters last month. Even with all those insane special effects, they couldn't fix the fact that the film was really dull. At least in this one, you're invested, entertained, and you genuinely care about what's going to happen next, whether it's silly or not.

While this film isn't filled with the amount of effects and magic play you hoped, I will say that what is in here is done rather well. Yea it's early 90's grade effects, but within the confines of the film and it's universe, they work well. I think the thing that was a constant surprise for me was how competent the entire thing was, from the direction, the pace, and the action. It looks better than you expect, and throw in the unintentional cheesiness, and well you've got yourself one helluva good time. Most of all though, it's Jeffrey Combs and Brian Thompson that make this great and worth the watch and investment. At a surprisingly short runtime of under an hour and a half, you've got nothing to lose.

I watched it on VHS, but it's also gotten a decent release courtesy of Full Moon on DVD and Blu Ray, which you can get for under $10. However, neither of these releases will be in widescreen; it's only available on full frame unfortunately. Honestly, it doesn't take away from the film in any way. It's not a visually impressive film to begin with, It wasn't made to be that way, so full frame works just fine, and this is coming from someone who prefers widescreen. So if you're getting tired of the stale big budget stuff Marvel throws at you, give this one a try. You might be surprised.

Posted by robotGEEK at 3:46 PM