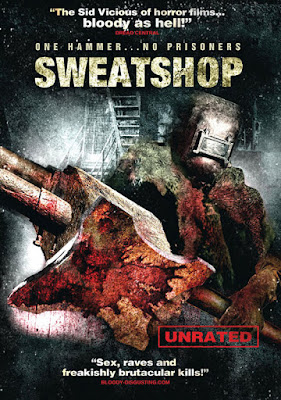 I came upon this film when it was recently mentioned in a list of  "Underrated Gore Films You May Have Missed". It sounded pretty much right up my alley, so when my local Blockbuster was closing it's doors for good this past year, this was part of my large haul I purchased from them for dirt cheap. So let's dig in.

A group of goths, ravers and punks decide to throw an illegal rave inside an abandoned building in the middle of the night, only to discover that someone or something is already lurking in the dark, killing them off one by one.

I'm not going to mince words. I hated it. Every single second of it. While there is in fact some good gore to be found, it doesn't save this horrible amateur mess. Worse yet, you have to sit through at least half of it to even get to the gore, and by that point you're so nauseous by all of the other terrible aspects of this film that when the gore finally does come around, I just didn't really care.

What's surprising to me is that this was made in 2009, yet it looks and feels like a film that was made a good 20 years ago, and I don't think all of that was legitimate. Written, Produced, Edited, Photographed, and Directed by Stacey Davidson, his particular set of skills in even the most basic area's of this production make this an increasingly frustrating experience to sit through. For example, there's Davidson's directing style, which right from the opening frame suggests that he really put no thought into the look of the film whatsoever, unless the point was to make it look fast and cheap. The camera never sits still for one split second, often looking as if not only an amateur was trying to shoot this thing, but someone who seems as if they never have actually seen a film to begin with to know whether they were doing it right or not. One of the things I noticed almost immediately is that he shoots most of the film in closeups, never really giving you any sense of surroundings. The fact that the entire film takes place at night, in the dark, makes it nearly impossible to ever make out what's going on. And the acting is terrible. I mean, there's mediocre acting in here and then there's just terrible and most of the actors in this fall into the latter.

A hilarious aspect of the script is that the word "fuck" is used an insane amount of times. I can't tell for sure if the intent was to really have people carry on conversations like normal human beings do, or if the dialogue was laughably bad on purpose, but either way, the overuse of the F word is so obnoxious and overused that we ended up making a fun game out of it by counting every time it was used, and confidently predicting when it would show up again. We gathered that it was pretty much every sentence, sometimes twice in the same sentence.

I will give it some credit though. For a film that looks like it was shot on a weekend with a bunch of friends in the span of maybe 2 days, the gore in here is pretty impressive. In fact, it's more impressive than films with ten times the budget, so in that aspect, the film does in fact deliver. However, I found it to be surprisingly null for a film that relies solely on it's gore content to keep you invested and entertained. There's a lot here, but it's not enough to forgive the rest of the film. But hey, that's just me.

I guess of all the gripes I have, the one that bugs me the most would be that none of it is explained or makes any sense. First of all, who is this big ugly killer known as The Beast who, while large and slow, seems to be able to sneak and hide throughout the film showing up at just the right moments to kill people using a giant sledgehammer that he can barely lift without anyone noticing. And who is he? Why does he kill? Why does he live in an abandoned factory? Why does he have 2 girls that are sort of human, and sort of zombies that look like the girl from The Ring? Why do they follow him? Are they cannibals? Why does he wear all that ridiculous fur and welding mask if he's just going to kill them anyway? Why is the film called Sweatshop?

I could go on and on about all the things wrong with this, but I won't. I'm over it and I'd like to move on with my life. It's an hour and a half of my life I'll never get back, and for that, I guess I'm a bit sour, but truth be told, I've seen worse. Not by much, but there are worse films out there.
Posted by robotGEEK at 7:42 AM