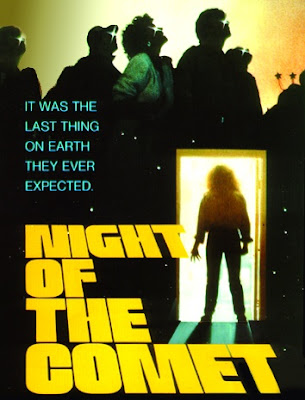 With Scream Factory's recent release of this 80's cult classic on DVD and Blu Ray, I figured I should finally give this a revisit since it's been in the back of my mind to do so for quite some time. Even though it was readily available to stream on Netflix for a long while, for some reason, I never took the time to do it, ultimately having to track down a DVD version since Netflix took it off before I could get to it. Don't you hate when that happens?

A meteor shower that was treated like a historical event, instead turns into the near end of civilization as those who witnessed it firsthand were either killed or turned into zombies. Only a few lucky survivors remain and must cope with being the last of mankind and deal with a band of scientists with a hidden agenda.

I can see why this was a film that I fondly recall seeing on HBO and Cinemax at all hours during the day and night back in the 80's. There's nothing in this that would require it to be played strictly at night, which means overall it's a pretty safe film. There isn't a lot of gore, and when there is some, it's a bit cartoony. There's no foul language, nudity, or adult situations either, yet it's an enjoyable, if albeit quirky, experience. It's a film bathed deep in neon lights and 80's cheese, but never deliberately sways into camp on purpose, it's just a product of it's time. In fact, I got into a debate about this very thing recently with my wife, who didn't like it and felt that the film was "trying" to be funny and was deliberately cheesy, where I felt the exact opposite. I don't think it's trying to be funny, mainly because I don't find it funny at all, not even unintentionally. And I don't think the film tries to be cheesy or campy just for the sake of it, I personally feel that it's a low-budget zombie film that attempts the serious route, yet it's mid-80's time frame and design just can't help but come off as campy, even if we didn't notice that then.

For me, I found it enjoyable, but it never really went as far as I hoped it would in any direction. It wasn't gory enough, or funny enough, or silly enough, or scary enough. It all comes off as a bit too safe and PG for my taste. However, there were things that do work for the film. I liked writer/director Thom Eberhardt (Captain Ron) sense of style in shooting it, especially in the scenes where he utilized filters to give the film a red or orange tone. Say what you will about it being a dated tactic, but I think it works really well, even the very few who still choose to use it today. It's effective in a very simple way and doesn't come off as tacky or fake the way CGI would more than likely make it look. But hey, that's just me. 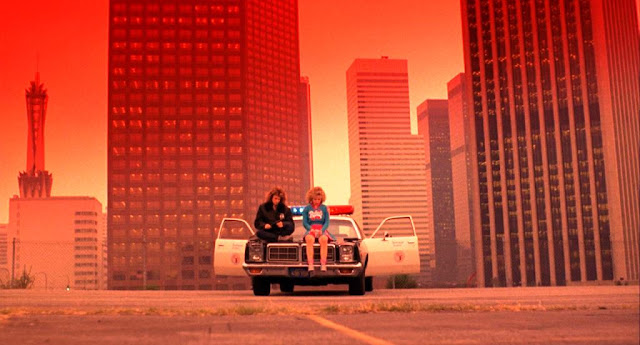 Another aspect we debated about this was how to categorize it. I'd always considered it a horror film, and my wife thought that was the genre it was going for, but having revisited I couldn't help but feel it was more a post apocalyptic/survivalist

Overall it's a fun little film that delivers some mediocre 80's camp in an unintentional way. It plays the film straight, to my surprise, but never really realizes it's full potential. Since it's release nearly 30 years ago, it's become a certified cult classic and I can completely understand why, believe me. I just didn't feel that it delivered in a way I was anticipating. Let me put it this way. I have no qualms about letting my kid see it. At all. Still, it's not a bad film in the least. Should you want to get your hands on Shout! Factory's new DVD/Blu Ray combo packed with tons of special features like new interviews, commentaries and more, head on over to their official website HERE.

Posted by robotGEEK at 9:10 AM