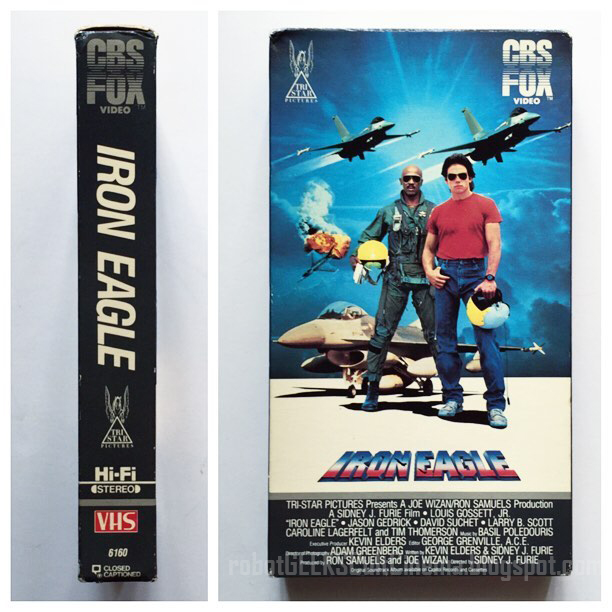 I have no excuse other than I seriously missed the boat on this one. Somehow, in some way, this remarkable film was able to slip through the cracks of my 80's viewing experience, and it wasn't until now that I finally made the effort to actually track it down and watch it for the very first time in my entire life. And it was all because I came across this VHS tape at a local thrift store, only to discover that while it was indeed the correct slipcase cover, the actual tape was of something else. And from that moment on I had an insatiable need to check this film out because upon further digging, I've discovered that it's quite the essential piece of 80's nostalgia.

In short time I was able to locate an effectively priced VHS tape online that met my budget and proceeded to have my eyeballs and brain melt in pure 80's cheesy bliss. Really, it just couldn't get any better than this in my humble opinion and I loved every single second of this.

A young hot shot pilot-in-training attempts a daring rescue of his pilot father who's being held prisoner in enemy territory. With the help of Col. Chappy, a retired reserves Colonel who now works as a mechanic, and a group of high school friends, he may be able to pull it off.

Boasting a notable cast of 80's character actors (trust me, you've seen them all in other great 80's classics), a rocking 80's soundtrack, and a lighthearted cheesiness that never wears thin or overstays it's welcome. It hits the mark in nearly every department and I really can't stress enough how enjoyable it was. When I mention it to others, they all tell me it was an essential part of their 80's viewing experience, so I'm a bit sad I wasn't able to join in on that because truthfully, Iron Eagle delivers big time.

Director Sydney J. Furie has had a remarkably eclectic career filled with highs and lows, but mostly he kind of straddles the fine line of mediocre and bad. But like any director, he has his share of gems, with one of them being the insanely underrated and 100% badass The Taking of Beverly Hills, a film I am wholeheartedly obsessed with now after having recently revisited it and being completely blown away by how much it delivered a perfect 90's explosion filled action film. But then he's also responsible for Superman IV: The Quest for Peace. Sooooooo.....yea. But hey, we can add Iron Eagle to his list of stellar accomplishments. Doing some digging I've discovered he's also done 2 of it's 3 sequels, so I'm looking forward to tracking those down as well at some point.

As I leave you with this, let's take a moment to admire this amazing cover. Obviously just a collection of photos put together, but man, how great is this that they're actual photo's and not photoshop rendered? I mean, who takes the time to get the actors to pose for poster art anymore like this? And how simple, yet highly effective it is at conveying exactly what it is. Not to mention it's just badass. Jason Gedrick looks cool and Louis Gossett, Jr. is just a badass here. I wish they still made more covers like this. Looking into the covers for the 3 sequels, it seems they didn't think to keep this trend alive sadly.

Posted by robotGEEK at 9:30 AM