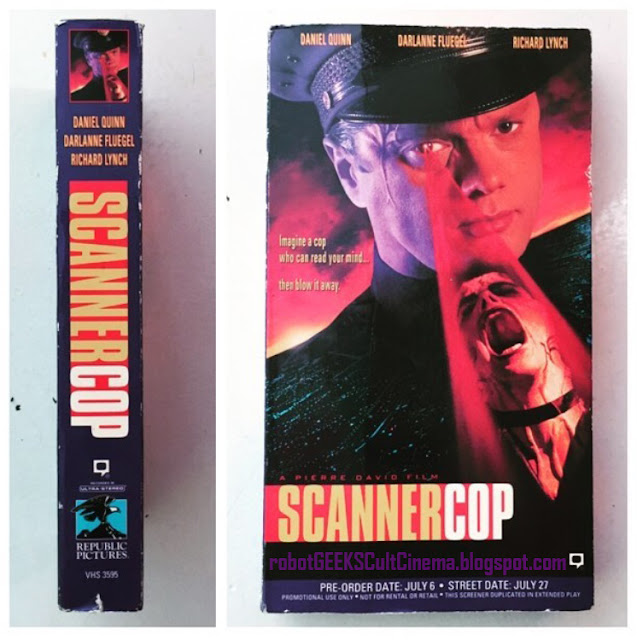 This is one of those low-budget titles that I would often come across in the video store, but until today, not knowing that it had any connection to the Scanner franchise, even though I am aware that the word Scanner is in the actual title. I don't know, I just assumed it was it's own thing, not ever taking into consideration it may have been an offshoot of the franchise. In any case, I was told by a good friend that I should check it out, because he was confident that I would enjoy it. I guess I had always suspected that this would be something I could really be into, I just needed someone to confirm it.

Scanner Cop was a nice little surprise. In fact, I'm almost sure it's ultimately better than the low-budget sequels to the original David Cronenberg classic. There's really nothing remarkable or badass about this film, but it's a solid film overall, made all the more better by mega producer Pierre David in the directors chair, who I might add, was also Cronenberg's producer on a number of early projects, including the original Scanners. So that right there gives this one an instant connection to the original, and David, being the mega-producer for an insane number of low-budget and mid-budget cult classics that he is, knows his stuff. Though he's only directed 2 films, being a producer for nearly 200 of them has given him the know-how to do it efficiently, and I thought the film looked solid. Let me put it this way. He does a much better job than a lot of other directors with over 20 films under their belt do.

What I enjoyed about this one is that it fuses elements of at least 3 different genre's seamlessly together. You have some action, a little bit of horror, and most prominently, thriller elements that tie it all together effectively. One thing I would also like to point out is that the film also offers up a healthy dose of notable character actors like Richard Lynch, Brion James and a slew of others that you'll surely recognize from other projects, like the guy who plays an orderly who was a bouncer in Roadhouse. It ended up being a fun guessing game picking them all out.

I'm not gonna lie and tell you that it blew me away, because it didn't. But it does have a lot going for it that easily makes this a much better film than you anticipate going in. Pierre David shoots it well, so it looks good. There isn't a lot of blood and gore, but what is here is done really well. The acting from all involved deliver the goods, but I just wish Brion James had a much bigger part than his little cameo. Ultimately, you won't be disappointed with this one. It delivers on the title, the cover art, and the concept in a way that most other films fail. Give it a a shot, because it's pretty badass.

Posted by robotGEEK at 1:48 PM