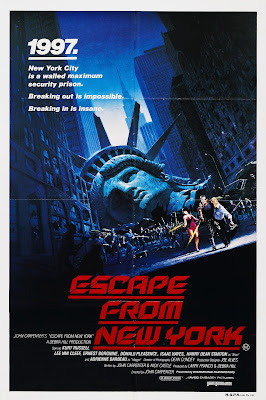 When writer/director/editor/musician Robert Rodriguez burst onto the scene out of nowhere back in 1992 with his cult classic El Mariachi, it was the beginning of a new trend in DIY filmmaking. The guy seemed like just what the industry was needing at the time, and he would follow up that landmark film with a few others that took the action and horror genre by storm, only to take a complete 180 turn and go in a completely different direction both in genre and in technique by 2001, nearly a full 10 years later with the release of the first Spy Kids. That film was the beginning of his transition into digital camera's and filmmaking, which would, again, start a whole new way of making films for other filmmakers. On the plus, it gave people a cheaper way to make films, on the negative, it gave people a cheaper way to make cheap looking films.

Rodriguez was one of my favorite filmmakers. His work on El Mariachi, Desperado and From Dusk Till Dawn, all films he shot on actual film, are considered classics to this day, and for good reason. They're badass. But not only that, Rodriguez had a very distinct style in how he shot films, even using trademark transitions that quickly identified them as a Robert Rodriguez film. That all changed with Spy Kids, and since then, he's become a director that doesn't resemble anything like the filmmaker I was obsessed with. Each new film since 1998's The Faculty is only another reminder of the CGI obsessed filmmaker he's become. Sure Sin City was fresh and exciting initially, but upon revisits comes off as choppy and less and less impressive. It just doesn't seem to flow naturally.

I for one am not at all on board for him to direct a remake of a beloved Carpenter classic. I don't know who initially came up with the idea, but personally speaking, I feel it's a bad one. And it seems I'm not the only one voicing my concern, as the film community, for the most part, feels the same. There are his defenders though who do feel he would be a welcome choice for the project. I'm just not one of them. If any film he's directed in the last 20 years is any indication, it's more than likely going to be a poorly rendered CGI mess, plain and simple. Hell, he couldn't even do Machete or Machete Kills justice, 2 films that should have been a home-run for him. Those are other perfect examples of his overuse of CGI for even the most minute little details, and it's maddening. Not only that, he doesn't seem to grasp the concept of having a CGI background look halfway normal or real in any regard, and it's details like that that seem to drive people like me mad. It's too much. What happened to the days of real gunshots and squib-work? The constant CGI blood, gunsmoke, and gun play puts a huge damper on every scene and I just can't help but feel it's totally unnecessary. I do have hope for Rodriguez though. There was a time when he was known as an important, gifted and progressive filmmaker. I doubt he'll ever go back to shooting on film, but if he can just lay off the excessive use of CGI for even the most mundane little things, I think he can become a top genre director once again. But where he stands now, I do not feel he's an adequate contender to helm a remake of a film I hold dear to my heart. But again, those are just my feelings. In any case, I'm sure he can't do any worse than what John Carpenter himself did with the awful sequel, Escape From L.A. Thoughts?
Posted by robotGEEK at 3:51 PM