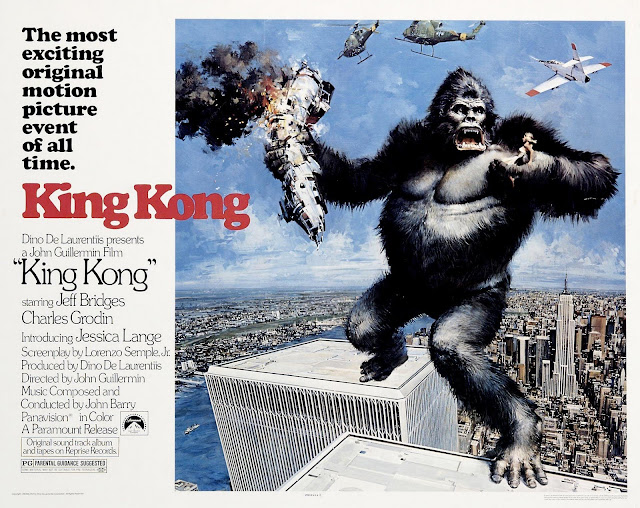 Having never actually sat through this film from beginning to end before, and with the new Kong: Skull Island fast approaching, I figured what better time than now to actually give this a watch, especially since Hulu recently added it to their lineup. It was just the perfect time. I have to admit though, I went in a bit apprehensive only for the fact that this version of King Kong (the first full-on adaptation since 1933 not counting his appearances in Godzilla or Japanese films) is never mentioned. At least not in my experience. So let's dig in.

To put it simply, King Kong blew me away and I loved it. I loved it so much in fact that I find it hard to believe that it's not just automatically considered a classic. It has everything that you'd want in a big budget Hollywood epic, and doesn't overstay it's welcome by running insatiably long. It's just as long as it needs to be and entertaining every step of the way.

What immediately impressed me right from the beginning was John Guilliame's superb direction. It's just the kind you'd expect in a big budget classic Hollywood epic, and he films it with such a professional's touch, classy to the nth degree, that it really makes you miss the way films were made back then. It's hard to pinpoint exactly how, but every shot just looks incredible and gorgeous, made all the more stunning in widescreen, which he utilizes to it's full effect. In short, the cinematography is simply gorgeous. The film "looks" big, expensive and epic in every sense of the meaning, which with it being a Dino De Laurentiis production, is only natural. You can just "feel" that it's a De Laurentiis film. He doesn't skimp on the budget. When he wants to make a big epic, he goes all out. and this film is a testament to that. There were things in here that literally blew my mind, like the fact that he and f/x master Carlo Rambaldi (E.T., Dune) actually made a 40 ft tall life-size King Kong for some of the wide shots. When these moments appear on screen, you really have to be paying close attention to even notice the fact that it's a 40 ft tall robot and not another composite shot, because they're so well done. I noticed them, because I notice things like that, but even then, I was mightily impressed with their ambition. They're literally split second scenes inter-cut with other's, but used to give you a bigger grasp at the scale, and it works. 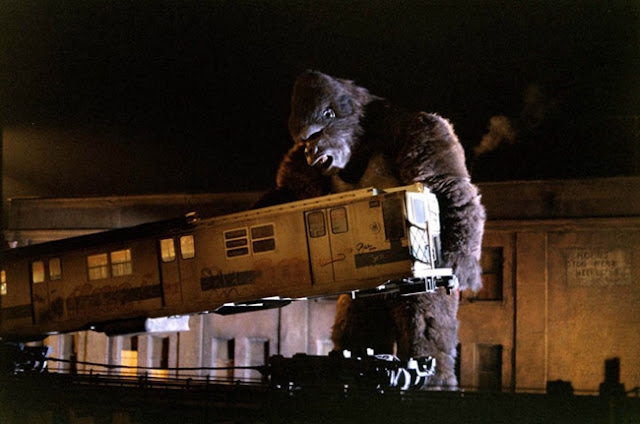 For me, the effects here were the real star of the film, with the practical effects work was nothing short of brilliant. They looked incredible, and for a film that was made in 1976, it's even more impressive. Even today, upon watching this for the first time, I was struck by how arduous they were, and how effective they are compared to the CGI stuff we use today. I mean, I went to see Peter Jackson's King Kong in theaters, and really wasn't all that engaged to the story. I personally feel that while impressive, the effects dominated the actual film. So much so that I can't even really tell you what parts of the film I actually liked because it was just a big effects heavy film and that's all I really took away from it. But here, while there are a lot of effects, the fact that they're done practically and grounded in reality, make them seem tangible. It's a completely different experience. Yes, you know it's a man in an ape suit, either superimposed against a blue screen image, or walking around in a massively impressive model environment, but it looks amazing. You can argue that while impressive, they look dated, but I would have to disagree. I found them to be better than anything Weta conjured up on a computer screen for the 2005 remake. I know I'm in the minority in this thinking, but I guess I'm just an old-school soul.

The cast is exceptionally talented in this. Jeff Bridges leads the charge as Jack, the "nice and caring" soul in the group, while an unexpectedly slimy Charles Grodin, in a serious turn, plays the villain of the film, Fred Wilson. The standout though is of course Jessica Lang, in her first film role, and she definitely steals the show as Dwan (the "w" and "e" are switched around on purpose, later explained in the film), a carefree spirit who dreams of becoming a movie star. The rest of the cast is filled with a large number of notable character actors who you're sure to recognize.

I really can't praise this film enough. It's epic film-making on a classically grande scale. This is the era of enormous sets, huge budgets, impeccable practical effects work and inspired storytelling. Everything hits the mark just right, and in my humble opinion, the film couldn't have turned out any better. To my surprise, it was able to be both touching and heartfelt, while at other times shockingly violent and brutal. This consistent shift in tone always kept me on my toes, never knowing where the next scene would take me emotionally, yet throughout, I was in constant awe and loved every single minute of it. It's damn near a King Kong masterpiece.

Review Source: Streamed on Hulu Plus
Posted by robotGEEK at 11:51 AM