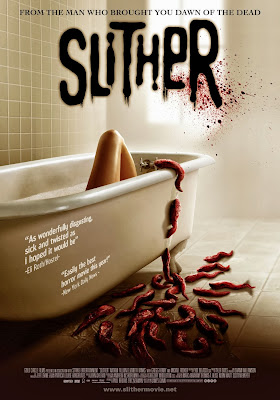 This one took me by surprise. Not only because of how fun it was, but in the quality of the production and the talent involved both in front of and behind the camera.

I remember my buddy Gabe being such a big fan of this one ever since it first came out, often trying fruitlessly to get me to watch it. I think the title might have misled me into thinking it was a low-budget forgettable indie horror film. That's just me though; not sure why I had such strong reservations though now that I think about it. So as I was browsing Netflix the other day trying to find something in the "horror" genre, I finally decided to give this one a try.

So right when it begins with the opening credits I'm already floored. James Gunn directing? The guy who did Super and who's now doing Guardians of the Galaxy? Starring Nathan Fillion, Elizabeth Banks and Michael "Fucking Merle" Rooker? Man, I'm sold. So I was immediately excited to see this, finally.

Slither has a lot going for it right off the bat. Outstanding ensemble cast, quality production value and a hip fun take on the horror genre. At times it feels like something Joss Whedon would have done had he made this himself. Now with that being said, I think I'm going to have to be completely honest here and say that while I did find it enjoyable overall, it just didn't "wow" me as much as I had hoped. I'm not sure if I can pinpoint the exact thing that didn't work for me, but it just always felt like it was missing something, or that it just didn't flow properly. I can't be alone in feeling this. Am I? I mean, all the ingredients are there. Abso-fucking-lutely. Yet somehow, in some way, it just doesn't mesh all that well together. I don't know if we would have to blame writer/director James Gunn or the editor.

Surprisingly, my first experience with James Gunn was by recently watching the highly enjoyable Super. I should have done a review on that one, but I never got around to it. That's another indie project where he mixed up a few genre's and gave us something uniquely original. It didn't blow me away or anything, but I found it an effective piece of filmmaking where in one minute it can be a sad tale of a pathetic lonely man who loves his wife so much, that he'll do anything to protect her and win her back. While on the other side of the table, at other times it's brutally violent, dark and sometimes gruesome to the point of shock. And then it can be funny, charming and cute. So it's kind of all over the place, but in a fun way. Here we have a straight-up homage to 50's "It Came From Outer Space" type films (you know, like The Blob), yet enhances it with witty dialogue and some truly outlandish sequences. And Fillion was a very nice and welcome surprise. At times, it just seemed like he was playing his character from Firefly. Awesome. I wish he had done more roles like this.

The ensemble cast in here is pretty great in their respective roles. But I think it's Fillion who ultimately steals the show. The guy is just a smart ass and a badass and combine the two, and well you have a semi-Han Solo. The film is also peppered with some regular character actors that give the film that little bit of extra spice it needs.

I should also get into the effects work, which is pretty great. I've seen bigger budgeted films that have far worse effects work, so I'm not sure if that's a testament to director James Gunn's skill as a director, or his effects team, or both, but it works effectively well. I can remember a good few that just gave me the shivers, while others were both funny and gross, which was the point.

This film has been flying under my radar for so many years, so I'm glad to say that I've actually seen it, but ultimately it just didn't impress me as much as I assumed it would. Maybe that's my fault? I've heard so many great things for so long that maybe I built it up too much in my head? Maybe.
Posted by robotGEEK at 10:35 AM