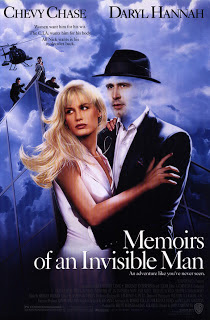 Memoirs of an Invisible Man is a fascinating film. It really is. As I continue with my John Carpenter kick, I wanted to check out something totally different from his filmography. Again, as with almost all of his films, I remember catching this when it first hit theaters, but never again since then until now. I don't know, I guess it didn't really stick with me, and in my young immature mind I think I couldn't get past the fact that Clark W. Griswold was trying to play a straight faced leading man. Plus, at the time, I didn't know who John Carpenter was, nor did I really care.

Flash forward 21 years later, I'm 21 years older and wiser (maybe) and a much more appreciative filmgeek, and I'm finally ready to tackle this one on once again, so let's do this!

Let me just lay this out for you right up front, Memoirs of an Invisible Man is a great, fascinating and superbly made film, but a flawed one. For me it seemed like nothing could measure up to the great first act of this film. If you've read anything into the production of this film, you know then that there were a lot of problems, a lot of shifting writers, directors and studio interference, and boy does it show in the final product. I'm not going to bore you with all the detailed specifics, but this script and it's directors changed hands quite a bit until we ended up with Carpenter in the directors chair, with about 3 different people credited for the screenplay, which is loosely based on a book of the same name by H.F. Saint. But that first act is pretty stellar, then it slows way down in the second and slightly shifts tone, then recovers slightly for the final and third act.

This was a passion project for Chevy Chase, who was trying to branch out into other genre's of film, with this being his first real attempt at accomplishing that. However, I think this was far too ambitious as his first outing. Maybe if he had started to mentally prepare us for a more serious side of Chase with minor or supporting roles in a few dramas beforehand, this probably wouldn't have been such a shock to most of us. If you read any review of this film, that will always be one of the main gripes; that they just couldn't understand why the studio would want Chevy Chase for this of all people. And they couldn't get past the fact that this is the guy from the National Lampoons films. And I have to admit, when I was young and I first saw this and not knowing anything about the production, I felt the same way. Come on, the guy has been doing comedy his entire career, so he had to expect some kind of backlash. But as I watch it now I have to say, Chase was just fantastic in this. Though it was still a shock to see him so fit, tanned and so serious, I thought he owned this role. And he really does have the perfect voice to narrate this film.

Let's get down to the nitty gritty. This film is a mess, but it's a hot mess. There are things to like, and there are things to not like, but my feeling is that the good far outweigh the bad with this one. For one, you've got John Carpenter helming this thing, so it looks great. Not your typical Carpenter visuals, but as one of his few director-for-hire gigs, and also one of the few without his name sprawled all over the damn thing, it looks awesome regardless. You've also got some pretty remarkable special effects. Bear in mind this was 1992, when optical effects were just becoming the standard and practical effects were a thing of the past. Even for having been done in this time period, the effects work is simply amazing. Even as I watched this now, I just couldn't figure out how they did some of that. Though some are a bit shoddy, there are others that are just simply stunning. The cast is pretty great in this too. Besides Chase, you've got Daryl Hannah and Sam Neill and a few other recognizable character actors. But I said it before and I'll say it again, Chevy Chase was fantastic in this. I mean, seriously, it takes you about 2 minutes to put aside all your feelings about him being a comedic actor because he's so spot on in this as the typical wealthy high dealing lawyer with a questionable work ethic.

Here's where the film does not work; the comedy bits. I think from the get-go, and even with the trailers, you're led to believe that this will be some sort of action/comedy/thriller, which it is not. And I think that when people finally got a chance to see this, they were confused because for the most part, it takes on a serious tone, yet they still find a way to throw in some funny bits here and there. But for me, that's where the film falters. I'm not sure exactly who's idea it was to try and make this a comedy in some respect, but it's those little pieces that take me out of the experience, because up until those points the film is working just fine as a straight up thriller with some great effects work and some nice visuals to boot. I know Chase wanted a serious tone, and I know Carpenter wouldn't have thrown in comedy on his own, and considering how many drafts this went through, who really knows? I just think it was a bad move in general and it hurt the films potential. Had they marketed this thing as a man who's just been dealt this huge blow (becoming invisible is kind of a big deal) and suffering an identity crisis while simultaneously trying to outrun a crazy FBI agent and his goons so that he can use him as the perfect weapon for the government, it would have done better and not surprised those who went in expecting a comedy starring Chevy Chase as an invisible guy. Another serious issue is the second act, or pretty much the whole middle where Chase's character hides out at a friends beach front condo. This is where the film kind of grinds to a halt and where more of the lighter moments come into play.

As flawed as this is, I'm not going to fault Carpenter for this one bit since he had no creative control in this particular case. The theatrical trailer for this did this film absolutely no favors. With that music, and that guy narrating, it's all leading you to believe this is some other kind of film than what it actually is, so I can understand the initial backlash. And that's not the most creative poster either. But it's been 21 years now, and time has certainly been kind to this little gem. Not in the sense that it's going to be some cult classic or anything, but it's a helluva lot better than I remember it being and if you can get past the forced humor, it's a pretty great little thriller starring an unconventional leading man with some outstanding effects.