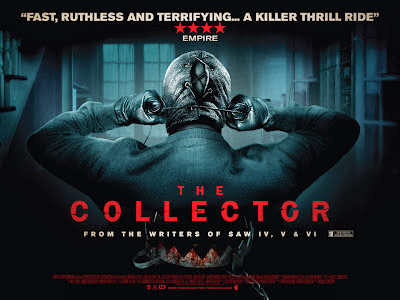 I know, strange that I decided to check these out out-of-order. Here's the funny thing though, if I had seen this one first, I'm not entirely sure I would have taken the time to see the sequel, which would have been a serious bummer since the sequel is leaps and bounds above this one.

Unless you looked into it beforehand, you would never know the same guy wrote and directed both of these films. That's how different they are in terms of tone, style, substance and overall entertainment value. It's so different overall that they even use a different guy to play The Collector in both films, giving you an entirely different take. I'm not sure if this was the director's intent right from the beginning, as they do in all of the Halloween and Friday the 13th films, but it's such a huge difference overall it's almost impossible not to notice, for better or worse.

One of the first things I noticed immediately both as the opening credits were rolling and as the film started playing was how amateurish it all looked and felt. Quite a contrast from the second film, believe me. It seems with the sequel, writer/director Marcus Dunstan did his homework, studying up on what makes a film look good rather than just getting the job done. And whether some of that is because of the work of the DoP or Dunstan himself, it's a vast improvement in the sequel. And I'm not bashing this completely, because it was fun. I dig the concept and the cast was pretty good. Of course, if you're not into the whole Torture Porn sub-genre, then you may not like this. In fact, I was surprised I did. The Collector, when in fact being a part of this sub-genre of films isn't nearly as hardore as the Hostel or Saw films. Yes, some, if not most, of the deaths are all due to elaborate traps set up by the killer, who has basically set up shop inside a residence, holding the family hostage in the basement all while an intruder has broken into the house to rob it. It's a crazy premise, but a fun one nonetheless. The guy is basically walking into a house of horrors and the dude just doesn't know it. Will he make it out alive? Will he try and save the family trapped inside? Will he try and take on the killer?

Spoilers:
Here's some of what bothered me. Moments after the thief has entered the residence we are made aware that the family that actually owns and lives in the house is being held hostage and tortured down in the basement. Yet as the burglar is roaming the house looking for valuables, and subsequently after he discovers that the family has been kidnapped and is being tortured and he tries to find a way to rescue them, the house is filled with an insane amount of intricate traps. Some extremely sophisticated, and some very ghetto. So if the intent of the killer was to capture the home owners and "collect" them, why would there be such an insane amount of traps inside this one residence, especially when it's mainly the burglar who is dodging these crazy traps and the killer doesn't even know for the majority of the film that their's even anybody else (the burglar) in the house? All I kept wondering was "Why are there so many traps in the house when the family is already caught and being tortured down in the basement?". It just didn't make any sense.

I guess it works if you sort of turn your brain off for this film. I mean, it would have made sense if The Collector knew that there would be a lot of people coming through that residence that he knew he was going to eventually capture, hence the elaborate traps. But it just seemed like overkill, especially when you consider his whole point is to "not" kill anybody, rather he wants to "collect" them.

I will say this though, that mask looks pretty badass. It's certainly done creatively, almost reminding me of Decker's mask from Nightbreed. You see nothing of the actors face who's wearing it, other than the darks of the eyes. And they seem to do this little effect where the killer's eyes look like they're almost constantly glowing. But it's done in a way to make it almost look like a lens glare or something. Just by looking at this guy, you just have no clue who he is; the actor and the character. Which surprised the hell out of me when I did some research and found out who the actor was that was wearing the thing. I was not expecting that. An interesting choice to say the least. I should also point out that they used someone else for the sequel, someone who looks completely different physically and it's a pretty drastic difference. In this first film, he's tall and thin. In the sequel, he's shorter and much stockier, more powerful. Taking a few ques from past slasher films and maybe learning from this film, they went a slightly different direction with the character of The Collector in the sequel as well, where he's played more as an unstoppable killing machine, almost like a Michael Myers. Where as here, he's vulnerable and just a guy with a cool mask.

I think I'll start wrapping this up by saying overall, it was a decent little horror film, it's just not nearly as badass or enjoyable as it's vastly superior sequel. Hell, I'd even suggest possibly just skipping this one altogether if possible if it weren't for a couple of truly gruesome and creative kills. They do a decent job of trying to get you all caught up to speed in the beginning of the second one, only they don't explain "everything", so maybe you should just go ahead and watch this. Don't listen to me.

I was surprised at how things ultimately played out for the burglar who unwittingly decides to rob a house that's been booby-trapped all to hell by a sadistic killer who clearly likes to fuck with people; another aspect that I was not expecting. You see, apparently, this thief is able to outsmart and outwit The Collector. Who woulda thought?! And for me, that was the fun part. Someone was actually able to use their brain instead of just freaking out in panic, 'cuz you know what happens when you panic right? Don't go in expecting much, and you'll enjoy this. Then go see the sequel immediately and hope they start working on that third film.
Posted by robotGEEK at 2:06 PM