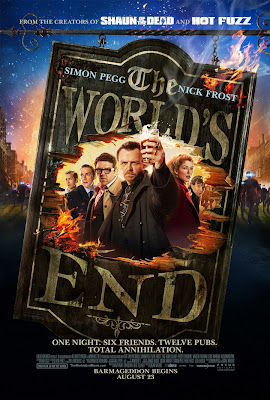 This one surprised quite a bit; in that it didn't quite work for me as much as their other 2 films in this supposed trilogy. By now, Shaun of the Dead is considered a certified classic because it works so great as both a straight up horror film and a comedy. Combined, you have double the impact. Hot Fuzz was a lot of fun. I think I just need to revisit that one soon because my memory is a little fuzzy.

But now let's get to The Worlds End. Once I started seeing the trailers popping up I was in awe. It looked right up my alley. I couldn't really tell what kind of film it was trying to be other than it had comedy with some sci-fi elements with an end of the world scenario. It just looked like a blast. So what did I think?

I will say overall I was a bit disappointed. Only because it's got a great premise, great actors, great effects and a great director, but somewhere in the middle it kind of loses steam, and during insanely crucial scenes, sequences and even plot points, it just doesn't reach it's full potential, which is a huge bummer because it's almost get's there.

The Worlds End starts off really strong. It's fast and funny, no scratch that; hilarious, as we're given a fast and brief history of this particular group of friends, how they met and where they are now and you immediately know you're watching another Pegg/Frost/Wright production. I love it when the film, or any of their films, are like this, complete with Edgar Wright's signature quick cut editing style. But once the shit hits the fan it kind of loses a bit of steam in it's most crucial point in the film. Then in the third act it slightly recovers, but ends up being kind of a different type of film altogether, which is cool I suppose. Only you're kind of expecting the funny bits to linger around for a while longer.

I have a ton of reviews to hit up, as I continue to watch new ones, so I have a lot to catch up on and I'll make this brief instead of complaining about all the things I didn't like about it. All in all, a decent offering from the trio. My biggest feeling was that with certain ideas and elements, they could have done more and gone further. Or maybe just gone about it differently. All the elements were there, it just didn't feel like it hit its mark. But hey, that's just me. I hear a lot of people love it. It's actually on a lot of "Best of Summer 2013" lists. So hey, to each their own.
Posted by robotGEEK at 7:11 AM