Review: John Carpenter's In the Mouth of Madness 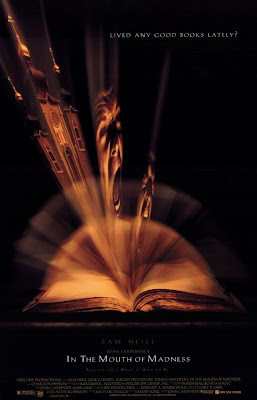 I have to say, I think this was my first real introduction to John Carpenter films. Yea I'd seen bits and pieces of a few of them growing up, Halloween and Escape from New York for example, but never really followed his films when I was a teenager in the 80's and 90's. That was until I saw this at the theater; I must have been 18. I don't know why exactly, but this one floored me. I had never seen one like this and I just loved the surreal aspect of it so much; Hell, I even had a poster of this on my wall forever. It still didn't get me to go and seek out every Carpenter film up to that point, but it made me more aware of who he was and from this point on, I would keep a close eye on his work. Unfortunately for me, what followed was his less than impressive output in his long career. So I'd have to say, this was one of the the last good films he had made before a string of misses, which ultimately led to him giving up on the big screen after 2001's Ghosts of Mars.

What I remember most about this was that it was so unique, and some of the surreal imagery just always stuck with me. Some of it didn't make any sense to an adolescent, but overall I found it to be a dark, surreal and a sometimes fucked up journey of a man hired by a publishing company to go find the worlds most famous author; Sutter Cane, who has gone missing. Once he arrives in the town where he was last seen, he realizes a lot of what is printed in the author's novels unfolds in real time as it is written in the books and that the town and it's inhabitants come right out of the books as well. Trippy stuff since they all seem to be fucking crazy.

So I hadn't actually seen this for about 15 years at least. I've moved around so often in those 15 years and with that, movies weren't a top priority for me for a few years. Crazy, I know!! But my recent Carpenter kick got me to thinking if this still held up, or if my memories were so way off base that this actually wasn't as good as I remember it being. So I figured now was as good a time as any to revisit this 90's Carpenter offering.

You know, this wasn't as amazing as I remember it being, but it wasn't bad either. I probably won't hold it up as high as a "lot" of other Carpenter films I love; and there are a lot, but it wouldn't fall anywhere near some of his bad films either. So it's somewhere right in the middle there. And as I said before, it's probably his last "good" film before ......well, you know. And this has a lot of great qualities. A solid cast, good practical effects by the always reliable Kurtzman/Nicotero/Berger, and an interesting concept. I think for me though, while there are a few standout scenes and sequences for sure, it doesn't really look like a John Carpenter film, with his signature extreme use of widescreen. I suppose with this kind of story, and it's setting, it must have been hard to film the way he usually does. But the constant feeling I had while sitting through this was "Wow, this doesn't look like his work". And the same could be said for films like Big Trouble in Little China, I know. But I'm just sayin'. There are certain films that work so effectively with his particular style of filmmaking, and while this one looked fine, didn't really play to his strengths as a visual filmmaker. But that doesn't mean it's not a good movie. It's very entertaining. Perhaps even one of the darker films he's done.

One of the things I noticed right off the bat was his usual  synth score (which I love!!) is replaced with a more rock infused style with electric guitars. Weird. For real, it kind of threw me off there and the more I think about it, the more I feel that if he had gone back to his usual style of music, it would have worked so much more effectively. Maybe even elevated the thing a little bit. I'm just guessing though.

Overall, a good surreal horror film with some truly bizarre and awesome imagery. One that's definitely worth a try if you haven't ever seen it or it's just been a long while since you have. Definitely one of his better films from the 90's. Though I have yet to revisit Vampires and Memoirs of an Invisible Man. Those are next!
Posted by robotGEEK at 7:32 AM