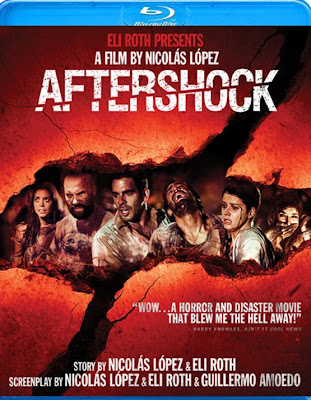 Man, this has been a productive as hell weekend if there ever was one. I can't remember the last time I've seen so many movies in such a short amount of time. So many in fact that I find it hard trying to remember exactly which ones and how many. But anyway, let's get started.

First up is the Eli Roth
co-written/co-produced/co-starring Aftershock. Fucking wow man. I had started hearing about this film in the last year or so, more so when it started hitting a few festivals and circuits. But it wasn't until recently when I started hearing really good things about it via Twitter and the interweb. Not from critics, but fans, which is where I usually put my money on; fan reaction. And holy shit were they right.

I'll admit, not knowing anything about this other than it's got Roth's name all over it and that he costars in this ensemble piece about the devastation after mother nature deals one helluva earthquake as he and his buddies are vacationing in Chile. So yea, a natural disaster movie, but done Eli Roth style; meaning plenty of fucked up gore and a terrifying glimpse inside the dark side of human nature.

For real, this was about as badass as a natural disaster film could possibly get. But just when you think they've shown you something really fucked up and intense, they go a step further almost every time and outdo themselves until it's pleasantly surprising and satisfying conclusion. I couldn't remember the last time I had such a good time watching a horror film with someone else. You know, that rare occasion when neither of you have seen the same movie and you're both just floored by it when it's all done. That's Aftershock. It was shocking, funny, terrifying, thrilling, engrossing and most of all, entertaining. And when I say shocking, I don't mean in the sense that you haven't seen some of these scenes before, but in the context of the story it was such a breath of fresh air to see scenes like this and that in this type of film.

Minor Spoilers:
One of the interesting things about Aftershock is that it tries to throw you off in the first act. Seriously, they do such a good job of making it look like any other friends on vacation cheesy ass film that you almost forget you're supposed to be watching a horror film. And I'll admit, it was fun regardless. Seeing Roth play the straight laced single father who would ultimately be the lame one out of the group was a trip, funny, uncomfortable (his idea of flirting is so painful) and entertaining that I think I was about 30 minutes in when I realized "wait, wasn't this supposed to be a type of horror film or something?". Yes, yes it is. So just when I start wondering out loud about that very thought the earthquake happens and the shit hits the fan in a big way. And you're immediately reminded that you're watching a movie that Eli Roth must have been a part of because the shit that happens from this point on until its conclusion will blow your mind. It ultimately plays out about as intense as a natural disaster film could possibly be, but more so playing on the dark side of human nature more than anything and how far and how low people will go when faced with the realities and horrors of mother nature. End Spoilers

I've gotta give Roth props man. For not only coming up with and helping finance this badass film, but for also giving one damn fine performance. I've never considered him an actor per-say. I mean, he's first and foremost a horror filmmaker; am I right? Yea he throws in a tiny bit part here and there from time to time in his films. But it wasn't until Tarantino cast him as The Bear Jew in Inglourious Basterds that he got his first meaty role. And well now he's got this, which I would consider probably his best performance on film to date. I mean, dude, the guy can act. After seeing this, there's no doubt about that. And I wouldn't be surprised if this ultimately became his calling card. Check this out, and you'll know what I'm talking about. Everyone else in this was fine. Not a bad actor in this ensemble cast of international unknowns.

Everything was top notch in this. The horror elements, the intensity, the effects, the acting, the new twists on the whole natural disaster genre, even the limited CGI was done effectively well. The only thing I had a hard time with was director Nicolas Lopez's direction. Too much handheld, and you all know how much I hate that. And it wasn't as obnoxious as most films these days and he never went to the whole "shaky-cam" routine, but still. I personally didn't dig it. Rarely was there ever a single steady shot. But seriously, that's all I really have in the complaint department. Overall, this was one of the most satisfying film experiences I've had recently. This just hit DVD recently so get your asses out there and rent it!
Posted by robotGEEK at 6:14 AM