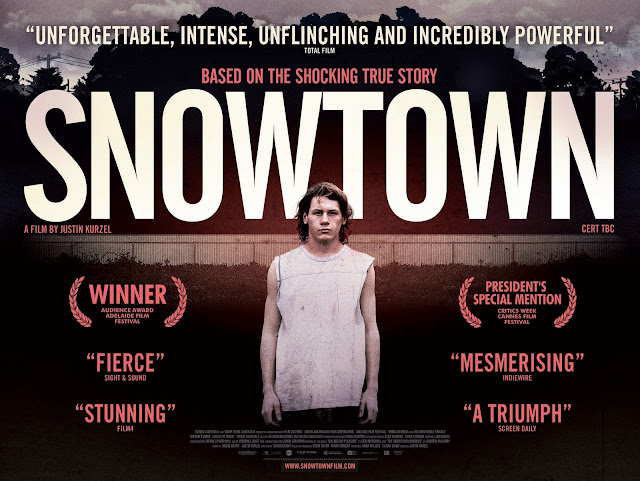 I went into this one knowing absolutely nothing about it, other than what the brief description that was given on Netflix Instant, and if you watch a lot of movies, that's always a gamble because you never know if the movie you're about to watch is going to suck balls or if it will blow you away. With as many movies as I watch, I've certainly experienced both. What's interesting about this particular title is that it keeps popping up in so many different categories like "Thriller", "Horror", "New Releases" and "Dark Psychological Suspense Thrillers". It was almost like Netflix was forcing me to watch this thing.

The Snowtown Murders, also know as the Bodies-in-Barrels-Murders were a series of murders committed between 1992 and 1999 in Australia. I'd actually never heard of these murders and was intrigued; I'm all for a good solid thriller about a serial killer, whether it be a foreign or domestic film. So after practically having this shoved down my throat for weeks and weeks, let's see how it did.

I have to be honest, all those quotes you see up on that poster there are quite accurate. This was a brutal and unflinching film about a serial killer who's able to convince and manipulate those around him to help in his killing spree of pedophiles, perverts, obese people, or basically anyone he deems unfit for society in his eyes. The thing about this film is that while it's a good film and a well made film, it's also a hard film to watch. It reminds me a lot of a Lars von Trier film, or even Requiem for a Dream in that respect. You know, the kinds of films you'll only ever watch once and never again; it's like that. While not big on gore and violence (though there is a lot, with not all of it directed solely at humans), it's not as much as you'd expect. Instead the majority of the film focuses more on the psychological aspect of the crimes, the accomplices and the victims, mainly young Jamie Vlassakis, the pre-teen who seems to take the brunt of the abuse from just about everyone throughout his young life, until he meets serial killer John Bunting, in the form of his mother's new live-in boyfriend and father figure, where things only take a turn for the worse. You could look at him both as an accomplice and a victim. And it wouldn't be far fetched to consider him both.

Going back to how difficult this was to watch; a lot of that has to do with it's poverty stricken setting, which quite frankly looks like hell. I mean, we're talking bottom of the barrel existence here, and it's extremely uncomfortable to watch at times. And first time feature film director Justin Kurzel's camerawork doesn't do the film any favors. A few standout shots here and there (many of them surreal) are completely overshadowed by Kurzel's heavy handed gritty loose handheld style, which only add to the films constant sense of dread. To just drive that point a mile further, the films deeply hypnotic score is arguably one of the best technical aspects of the film. I'ts just haunting.

Truth be told, this film tests your patience, but if you're willing to see it through to the end, you're handsomely rewarded with a dark, bleak and disturbing film with some outstanding performances. But what's also a little frustrating though is that not a lot is explained in terms of backstory, or relationships between a lot of the central characters, which creates a lot of confusion. Often times they just show up, with no rhyme or reason, and you just have to accept it. I had to do some research afterwards just to be able to fill in the gaps, figure out who was who and how they fit into the picture so that some of it made sense, which you really shouldn't have to do. But what triggers all this is a slow burn style of film with images and sequences that have no meaning (seemingly) and have no correlation to anything that's going on (seemingly). That is until you've finally made it through to the end and all these bits and pieces from earlier finally fall into place and start to make a little sense. But you're still left with a shitload of questions.

Ultimately, a deep affecting, brutal, but flawed film. But it's one that stays with you for a while and kind of ruins your day because it's depicted so starkly and you know that shit that happened in here really did happen and there are monsters like these out there.