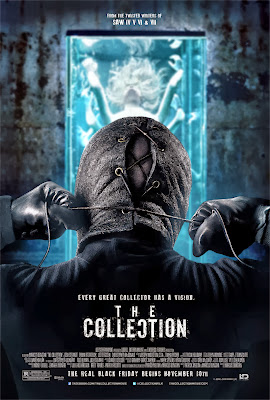 I think I've always been kind of turned off to this new series of horror films because this, along with it's predecessor, The Collector, can't help but constantly remind you that the same guys who did these also worked on a majority of the Saw films, a franchise I'm just not a fan of in general. But as much reading as I do online from various movie sites and movie blogs, this film in particular has gotten pretty much nothing but positive word of mouth. So even though I never got around to watching The Collector (the 1st film in this series), I thought "what the hell?" and gave it a shot anyway. And to kind of get caught up to speed on the basic story, I just asked my girlfriend who had in fact seen the original.

With that being said, I was slightly worried that would take away from my experience or leave me a bit confused. Well I can tell you, that's not the case here. Read up on any synopsis of the first film and you're all caught up with all you need to know going into this one and with some minor little details aside, this was just fucking awesome and a really, really nice surprise.

Here's the thing; I do really enjoy these types of horror films, when they're done correctly and made well. However, in this day and age that seems to be a rare thing when so many of these "torture porn" films come out pretty much every year and you honestly can't differentiate one from the other. And it would be one thing if the films weren't made very well, but if they at least had some decent kills or better yet, decent effects, then at least that would be something. But I found myself having given up on that sub-genre some time ago. It just feels like a lost cause. Eli Roth and James Wan introduced it to us most effectively beginning in 2004, but have we gotten anything remotely as good since then? My answer would be no.

So that's why this was such a breath of fresh air because it has so many things going for it that I hadn't found in other films of this type. Not only does it have some really fantastic kills and death scenes, but it's also well acted from all involved (you're not gonna see some pansy looking models in this one), and it's shot really well. So well in fact that I'm surprised I hadn't heard of this director before, but I'll sure as hell be keeping an eye on him. And that's so important to me, even with horror films. If you're gonna take the time and money to make a film, make the damn thing look good. It's simple. Yet about a good 90% of the new directors out there don't seem to really give a shit how their film looks. The norm these days seems to be fast and cheap and to just copy the style of the "flavor of the month". There's zero originality or talent these days in the horror field, until I see films like You're Next, Aftershock or this, and my faith has been restored just a little with each new "good" or "decent" horror film.

The Collection pretty much starts off just plain awesome and continues with this trend all the way through until the satisfying conclusion. I do feel we've got a new horror franchise on our hands with this one and if this film is any indication, it looks to be on course for a solid set of films and possibly even a new horror icon. Now only time will tell if this Collector ( a guy who literally collects "people") will go down in history as more of a Jigsaw or a Michael Myers. Okay, sure, you can nitpick the shit out of films like this where logically, some or a lot, of things just don't make sense. But who really cares? I went in to see a film about a guy killing people and was not only handsomely rewarded with that, but I was actually floored from time to time at how creative and downright gory it got. On top of that, it's really well made and put together and that's one of the biggest draws for me. I'll take "quality" over "quantity" any day.

Let's dive into one of my favorite sequences shall we? The film starts off in a hidden nightclub. You know, the ones that nobody seems to know about, except the cool kids? And they're always located in the ghetto and you need a secret password to get in from some back door alley? That kind. So the movie begins in this undergound club and let me tell you, the shit that is unleashed in this films first act inside this nightclub kind of blew my mind to be quite honest. I sure as hell was not expecting that and it was pretty damn well flawlessly executed. Of course nothing else in the film can quite measure up to that insane sequence of "awesome", but it sure as hell tries and left me with a thoroughly entertaining experience from beginning to end.

Doing a small bit of research on this film's writer/director Marcus Dunstan, I see he's done quite a bit of things in the horror field, most notably as a writer penning films like Piranha 3DD (an absurd, but totally fun film), the Feast films (3 to date and I haven't seen a single one yet, but I've heard good things), and Parts 4, 5, and 6 of the Saw films. So he's been a round for a little while and has his teeth firmly sunken into the genre. As a director though, he's only done these two Collector films. Well I'm a fan now and if he continues to keep up the talent he exhibited behind the camera for this particular film, I'll continue to be one as long as they turn out as well as this one did.

Look, I'm not gonna lie and say this thing is actually scary, because it's not. Let's be honest, rarely is a horror film actually scary these days. Am I right? So let's not start bashing the film for not being scary. No, you won't be coming out of this one having had the shit scared out of you, but you will be awesomely entertained.
Posted by robotGEEK at 12:48 PM