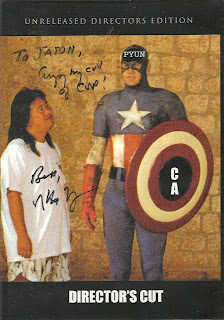 Some quick thoughts on my love for Albert Pyun films before we get to the serious stuff:
Albert Pyun is such a unique filmmaker, and has garnered quite the reputation in the 40 years he's been making films, beginning with 1982's The Sword and the Sorcerer, one of the best sword and sorcerer films ever made, in my humble opinion. In those 40 years he's made 50 films (WOW!!), with the critical hit Road to Hell being his last film; unless he finishes Cyborg Nemesis somehow. Not sure what the status is on that one yet.

Throughout his career though, he's been compared most notably to Ed Wood, which I don't think is a fair comparison at all. Personally, I find him to be a gifted filmmaker working with limited resources. Now if someone actually gave him a good chunk of money to make a film with a decent budget, I know he'd deliver something pretty badass. I just know it. Because while not all of his films work, some of them do. And it's those that do that show me how truly talented this guy is. Some of my favorite all-time films are Albert Pyun films. In fact, I credit him for getting me into and loving several genres of films that I probably would never have had it not been for a few of his, most notably (in no particular order), which also just so happen to be some of my favorite films ever; Nemesis, Cyborg, Dollman, Radioactive Dreams, The Sword and the Sorcerer, Brain Smasher and Captain America (yes, I happen to love that one) to name a few. And there are a slew of others that, while not great, are entertaining as hell in their own right that I'll watch from time to time. But that's not even counting all the ones I haven't seen yet, which there are many. I mean, the dude's prolific; sometimes even throwing out 5 films a year! And I'll be honest, he's made some that I just don't like, but what director hasn't?

And you know, I just can't continue without commenting on how much of an awesome person he is in general. For a guy who's as busy as he is and constantly working, and still able to take the time to comment on some of my reviews (he has!!), personally respond to messages and to even promote some of my reviews of his films on his Facebook page, well he's the genuine article; a solid guy in my book.

Well, if you haven't heard, he's been recently diagnosed with MS. Unfortunately, this limits his ability to do a lot of things and he will have to stop making films the way he's used to making films. However, I like to think positive and believe that, being as creative and as unstoppable as he is, he will find a way to continue in the industry in some capacity. Hell, as he jokingly (I think?) stated a short time ago after first hearing of his diagnosis, he'll strap a damn camera on his wheel chair and make films that way. You know, I can actually see that happening. If Christopher Reeve could direct a movie with no ability to move, then I know Albert can. I just have to believe that. Okay, well this ran way longer than I was expecting it to. Apologies for the rambling.

As a way of ending his career on a high note, the lovely Cynthia Curnan, his sidekick for many years is putting together a special screening of Road to Hell, which has received a lot of praise for its originality, performances and unique vision, which will also double as a celebration of his work. But they need our help in securing financing for this event. That's where Indiegogo comes in. We can donate anywhere from $5 to whatever we want, with each donation making their dream a reality. But wait, there are cool benefits to donating. Just follow the link below to the official page for all the info you need. I've already donated, and I hope you will too. Below you will find further information and a link to the official Albert Pyun Career Celebration Indiegogo page.

"Albert Pyun's detractors have said "Who keeps hiring this guy? He ruins movies"

Nobody hires Albert Pyun  He creates his movies from first thought to delivery. He raises his own financing but never manages to raise enough to make the movie he envisions.  One film critic said it best:  "Albert Pyun's inimitable style is Shoot really fast before you run out of money".

But those of us who love his movies love them just as much for the punishment he took to get them to us. His single interest since he was 10 years old was to make movies no matter what he must endure.

Still he always hoped for a decent budget and to be able to screen his films in a decent venue to a full capacity audience.

That's what this campaign is about. Now that Albert has MS and cannot keep working, his friends and fans want to fulfill Albert's dream to screen a film he's proud of to a full house of all the artists he's worked with over the years, and for his  fans and friends.

Road to Hell is the only one of Albert's films to receive so many awards and positive reviews. It is his 50th movie and fitting climax to his 40 year career.

We want to give the screening event the best promotional effort that any of Albert's films have ever received. To achieve both the marketing, star guest list and to secure this state of the art venue, we need to reach out to Albert's fans, the fans of his many movies (and especially those who loathe his movies), to be able to stage an event worthy of this kind, hardworking and generous filmmaker who's vision and artistry, while certainly weird at times, were always fueled by his enthusiasm for the motion picture experience within a dark auditorium.

IF WE DON'T MAKE OUR GOAL, we'll just shrink the theater, cut the ads and let go of bringing stars from outside the country. We'll still have the screening, Albert will be thrilled and we'll all make new memories."

You can contribute to this cause, which runs through October 2, and get further information HERE.
Posted by robotGEEK at 2:03 PM