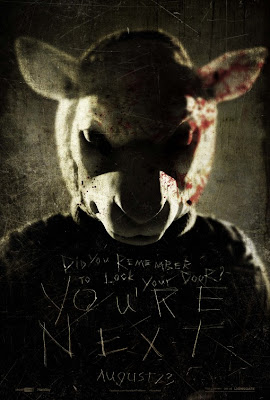 Is it me or does it seem like there's a big rush of "home invasion" films lately? I mean, I'm sure it's not as much as I think it is, but really, it feels to me like the "home invasion" is the new sub-genre in the horror field; especially  in the last 5 years with films like The Strangers, Silent House, The Collector and most recently The Purge. I know there are a whole lot more; I just can't think of them all right off the top of my head at 1 am.

And here we are with yet another film using the same premise; a bunch of people getting together in an isolated house out in the woods (when will they learn?) when they of course start getting picked off one by one. But you know what? This ones actually pretty fuckin' good.

This is a film I remember reading about a few years back when it hit a few festivals, all with great reviews. But for some reason it disappeared and only got a release just a few weeks ago. But hey, same thing happened with the Drew Goddard/Joss Whedon Cabin in the Woods, another little horror film that took years to find distribution. I mention that one because like You're Next, it just knocked my socks off.

Yea, yea, I know. I bitch a "lot" about the state of horror films these days. I really do. But every once in a while a little gem pops up here and there and reminds me that there's still hope for the genre. Having grown up in and being a product of the 80's, I remember what horror films are supposed to be like. I remember going to the theater for the newest Friday the 13th, Nightmare on Elm St., Halloween and so forth and so on. I remember renting films like Evil Dead, Chopping Mall, Return of the Living Dead, Re-Animator and well shit, you know what I'm getting at, for the first time from my local video store when they were "new releases". Then we got into the Scream/I Saw What You Did Last Summer/Urban Legend generation, or as I like to refer to as the "Kevin Williamson era of horror", where hot unnatural looking humans from the current hit television show were cast as "regular" people to run around making stupid decisions. And then The Blair Witch Project happened, and then every wannabe hack figured they could mask their inexperience and the fact that they had zero talent by making "faux documentaries" or better yet, the "found footage" film. Then we got into the "torture porn", which was at least a decent attempt at revitalizing a dying genre. At least until hacks started culling together what little money they could and rehash any worn out premise they could find and adapt to the Michael Bay style of filmmaking, which basically means to just run around and shake and spin the camera as much as you can until those of us with vertigo or motion sickness throw up. But wait! That's not enough. Let's do lots of unnecessary quick edit bullshit to fuck with those of us with epilepsy too.

That's where we're at in the horror genre right now, and it's so sad. A lot of these filmmakers get a shot at making a film "one" time, and they blow it by doing it the same way everyone else does, and you never hear from them again. It's a rare thing these days when a guy who's out making his first film or "calling card", and actually takes the time to make the film look good. Prime example; Antiviral. While not a great film, it's certainly an impressive debut and one of the most striking ones I've seen in a while, even though Cronenberg does revert to a lot of handheld stuff for about 20% of the time. But you can see the talent there.

Alright, yea I got off track there for a bit; my apologies. You're Next is important because like the recent The Conjuring, reminds us how good horror films can be. Yea I know a lot of the films I've chosen have gotten a mixed reception. The Conjuring basically felt like a remake of The Amityville Horror (I still enjoyed it). And Cabin in the Woods wasn't scary, but damn if it wasn't badass. And Antiviral was more of a surreal thriller than anything. Very slow, often times experimental and moody; ultimately not everyone's cup of tea. And You're Next is just another typical "home invasion" flick, but with a decent little twist. Nothing that will blow your mind or anything, but taking into consideration that it had an awesome amount of gore and violence, a strong cast, some sweet kills, and even a few surprises and scares for those out there that easily scare, You're Next was a straight up solid horror film. Seriously, what more can you ask for?

The filmmakers have taken the basic formula and somehow got it right. It's not going to reinvent the genre or anything, or even spin it on it's head, but it was a thrilling ride the whole way through and entertaining as hell. And I'll say it again, there were a few nice surprises in this one; like who the main character ended up being. I really didn't see that one coming. The nice little cameo by one of my favorite new directors. Or that Barbara fucking Crampton (Re-Animator, Chopping Mall) was in this?! I had no idea until the credits ran at the end that that was her! And then just the plain brutality of it all, especially in the third act. The gore, the kills, and the violence was just awesome and extremely well done. I won't spoil it for you, but there were some seriously badass kills.

So now that I'm done loving all over this, here are the two things I did have a problem with, and they're just minor complaints really. First off, the look of the film wasn't anything to rave about, for the most part director Adam Wingard kept things stable and coherent. These days, that's really all you can ask for. But there were a few times when his loose freestyle almost turned into handheld shaky-cam territory and just totally unnecessary. Not so much that it ruined the experience, but enough for you to notice and enough to where twice during the film I almost lost my lunch. But then he recovers and things run smoothly again.

Secondly, the music. The music was fine. In fact, it's pretty standard fair and truth be told, you don't really notice it. That is until the third act when all of a sudden it morphs into some 80's style synth and man, what a fucking treat! Like, reminiscent of Goblin. It's such a drastic change that you immediately notice and it stays through till the end credits and you can't help but wish that they had stuck with that style for the whole film. But then again, I guess it wouldn't have had as big an impact as it did when it shifted gears in the third act. So I guess you can call this both praise and a complaint. Ha! Fucking rad score in that third act. I'll just leave it at that.

So there you have it. A film that on the surface looks like another home invasion horror flick, but one that's got a few tricks up it's sleeve. I don't really see this thing making any money because the promotion is non-existent, and the trailers don't do this any favors. I had to rely on positive word-of-mouth, and so now I'm spreading that positive vibe and hope that you will make the effort to go check this out while it's still in the theater, for however brief that may be.
Posted by robotGEEK at 8:43 PM