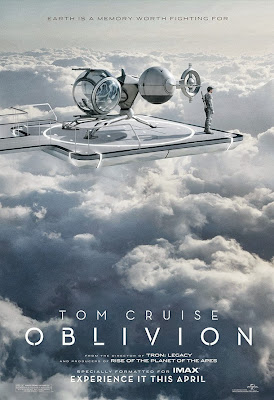 Ever since Tron: Legacy came out, I had been egearly waiting for director Joseph Kosinski's next film. While Tron didn't really blow me away like I had hoped it would, you can't deny that it's a beautifully shot film. You can tell Kosinski is an artist, carefully framing each single shot with such precision that it's really hard not to be impressed. So 3 years later we have Oblivion, another sci-fi film, this one starring Tom Cruise. Does it fare any better than Tron: Legacy? Has he improved as a filmmaker?

The answer is a yes on both counts. In fact, it's a big yes. Not that I was surprised that it was good, because I knew it would be. I think what surprised me most was how much I ended up enjoying this. For me, to be able to enjoy a certain genre of film I need to be invested in that genre wholly, or I just won't be into it. So while I had this in my possession for a few weeks, I had to wait for the right opportunity to sit down and see this, and for me, that makes all the difference in the world. So my mood this particular night was that I wanted to see a sci-fi film. A slow, visually stunning sci-fi film. Something along the lines of 2001, Alien, Moon or Outland. Oblivion certainly fits the bill. This is sci-fi epicness at it's best, and that's all due to a tight, polished script by Michael Arndt (Toy Story 3, Star Wars: Episode VII), Kosinski's amazing, lush and gorgeous visuals and Tom Cruise's searing performance. You know, with the exception of a misfire like Rock of Ages from time to time, the guy just does not make any bad movies. So despite Oblivion having such an insane amount of eye candy, it's really Cruise who carries the film as the majority of Oblivion is just on him, rarely ever interacting with any other human beings. It works effectively well here, all due to Cruise delivering the goods.

So what Oblivion ended up being was more of a solo project as Cruise is front and center for the majority of the film. He does have his job partner Victoria there also, but they usually communicate through radio as she mans the computer and he does the physical grunt-work out in the field.  What I think is funny is that they tout Morgan Freeman as costarring in this thing, yet he's honestly barely in this, and when he does first show up, it's about the halfway point in the film, then he disappears for a large chuck again. He does add a bit of weight to his role though, I will give him that.

But you know what? It's really the visuals that draw you in more than anything. Oblivion is just gorgeous right from it's opening frame down to it's closing shot. Epic in it's scope, yet with an old world touch. And Kosinski takes great pains in setting up each and every single shot with such elaborate precision that you're just left in awe of the result. There honestly is no other director out there like him, especially not in the science fiction genre, who shoots clean and efficient, and can produce such stunning results. Well okay, let me take that back. In my excitement I may be getting ahead of myself. There "are" other directors out there that can and do produce similar results. Right off the top of my head Tarsem Singh (The Cell, The Fall) comes to mind. But really, there are not that many of these types of filmmakers left out there working today. So back to Kosinksi. Not once does he ever revert to hand-held camerawork; not even in the action sequences. In this era of filmmaking, that's a rare thing indeed. Oblivion is one of the most gorgeously shot science fiction films I've ever seen.

I am a HUGE fan of the original Tron film. Some would say a little too obsessed. I just love that film to death. So you can imagine my shock and utter joy when hearing upon the news that 30 years later, a sequel was finally in the works. And with today's technology, the possibilities were endless. And the I saw the film, and well.......I was disappointed. I'll admit, some of my issues were with the script, but I also didn't really dig the new look of the programs. I prefer the old school way everything looked, but hey, it's a new era and they were trying to introduce a whole new era into the world of Tron. Start a new franchise, sell a shitload of toys, you know how it goes. Well Tron: Legacy didn't explode like Disney had hoped it would and well, there are a whole lot of reasons why that is. But despite it's many issues, it's a visually impressive film to say the least. If anything, we got some great visual eye candy and a groundbreaking film score by Daft Punk. So we all know that even though he was a first time director, Joseph Kosinski can put a film together, and the guy knows how to shoot with an architect's eye. Learning a few things from Tron, Kosinski now tackles another sci-fi film.

So what kind of film are we ultimately left with? Oblivion is a slow film. Tom Cruise spends the first half of the film showing us what he does on a day to day basis as a drone repairman, roaming the desolate and seemingly empty planet for drone's that need repair. It's a dull and stale existence as most of the time there is nothing to do. His partner Victoria, who mans the control station; his only source of human interaction. But it's his job, and it's a job he's been doing for years. A job he's very good at. Yet he begins questioning things, much to Victoria's dismay. And that's where the second half of the film takes off. A space pod crash lands on Earth with a few survivors and what he discovers on the wreckage of that pod shatters everything he knew about everything, including himself.

So here's why Oblivion is so great. While slow for the first half, you're never once bored as it's a fascinating example of impressive filmmaking, a thoughtful approach to the material, a haunting score reminiscent of Daft Punk's Tron: Legacy score, and jaw dropping special effects all anchored by a strong performance by Cruise. If you're in the mood for epic sci-fi that's one of the most beautifully shot and designed films in years, you can't go wrong with Oblivion.
Posted by robotGEEK at 7:25 AM