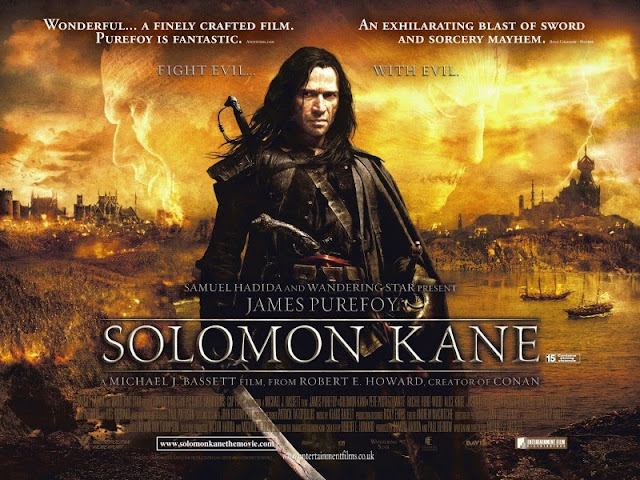 I'm not entirely up to speed on what the whole deal is with this particular film having been made in 2009 and not getting released here in the states until this year. Anybody have any info on this? Regardless, I remember reading about this way back when and always coming across images on various film sites repeatedly for the following years; yet no movie here in the states.

So you can imagine my surprise when I'm casually browsing Netflix recently and saw this under the "New Releases" section. I love when shit like that happens. So yea, finally, here's my chance to check this one out. After literally waiting years to.

I'm just gonna lay it all out here, I loved this film. It's exactly what I was hoping it'd be based on everything I had read about it, and it was a completely satisfying experience. And as a fan of  these types of films, there really is just so much to like. Right from it's opening frames to it's closing shot, Solomon Kane is a stunningly shot film with breathtaking cinematography, a badass design element in all aspects; creature, costume, set decoration, etc., and some perfectly choreographed and executed visuals from writer/director Michael J. Bassett. I mean, this dude made a statement with this film. And guess what? I think this is a helluva lot better on all fronts than that big budget Conan remake. In fact, this reminded me a lot of another medieval "under the radar" type film from France that came out some time ago called The Brotherhood of the Wolf. Speaking of which, I need to rewatch that and do a review on it. I remember it fondly and as I watched Solomon Kane, I couldn't help noticing the similarities in both style and substance. TBotW was a fascinating example of how to blend genre's the right way. I'm not saying Solomon Kane does the same thing, but taken as a whole, it has a similar look and feel. A funny little fact I'll also throw at you, both directors of these two films both directed a Silent Hill film each. Christophe Gans (The Brotherhood of the Wolf) did the first Silent Hill, and Michael J. Bassett (Solomon Kane) did the second. When you see this film, you'll understand why. Solomon Kane is just oozing with style.

I should also mention that the cast in this was both surprising and just overall top notch. Surprising in the sense that I wasn't expecting to see so many notable actors in this in small roles like Max von Sydow, Alice Krige and Pete Postlethwaite. And then there's James Purefoy, who plays the titular character. I've heard the name before, but the only thing I recognize him from was the Kevin Bacon starring television show The Following, as the serial killer. But I have to say, he more than carries the picture and exudes quite a presence whether he's playing a savage brute, or a peaceful man who's renounced violence. Basically two sides of a coin, and he plays them both perfectly.

If you need a synopsis, here's a quick one:
Solomon Kane is a ruthless savage brute and murderer. When his soul is bound for hell, he renounces violence and becomes a peaceful man living a simple existence. That is until he befriends a traveling family and is helpless when their daughter is kidnapped to be sold into slavery. He gives his word to her dying father that he will find her and free her if it's the last thing he ever does. Bound by his word, he seeks out to find her and deliver his brand of justice.

After having finally seen it, I'm kind of shocked it doesn't have a bigger reputation than it currently has. It was pretty straight-up badass on all levels and surely entertaining from beginning to end. I should also point out that this is effects heavy, but it's done so well that you never once want to yell at the television screen "Aw that looks so fake!". In fact, I probably should have made a point to mention the effects work early on because it's pretty outstanding to say the least. And the overall design work for the creatures, villains and whatnot by creature designer Patrick Tatopoulos was just amazing. So many times we kept commenting how killer and badass certain characters looked throughout the film. Hey, that's a testament to true originality to character design.

In the second act there's a lull that slows the film down quite a bit. Even then, they pepper the film with such stunning visual eye candy and a few interesting sequences here and there, so you're not really ever bored, or at least I wasn't. Strong opening, and if you can make it through to the end, you'll be a happy filmgeek. Because even when it slows down in the midsection, you just know Kane is going to get angry and be a badass again. He has to, that's what the movie's about. He's going to renounce the fact that he renounced violence in the first place, and get back to doing what he does best, and that's kicking a whole lot of ass. And boy does he ever.
Posted by robotGEEK at 1:27 PM