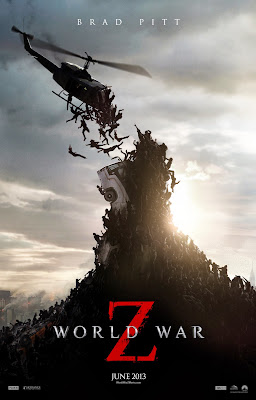 I haven't read the book, so I am basing this purely as a film experience, and not as an adaption or book to film comparison. With that being said, as much as I tried getting to the theater to see this, I was never able to. For me, this was one of the few times I would have gladly paid full price for a theater ticket in this day and age to see a film, because quite frankly, based on the trailers alone, this looked awesome. Unfortunately things didn't work out for me that way and I had to wait till it hit DVD, which was just last week. So I finally jumped at the chance to check this out; now let's do this!

My initial reaction after watching WWZ the other day was that I thought this was great, and highly deserving of it's box office success. For me, this was a nonstop thrill ride from beginning to end. Again, I'm not comparing it to it's source material, just as a zombie film in general, and in that regard, this was pretty badass.

All the bad press and negative forewarning was all for naught as WWZ was a thoroughly and captivating thrill ride. From what I keep hearing and reading, most people don't dig it for the simple fact that it's so different from the book by Max Brooks. I can understand that. Had I read the book beforehand, I might feel the same way knowing how different the source material was. A lot of other gripes seem to come from the fact that you go in expecting a typical zombie film, when in reality it's really more of a "survivalist" story. And those are other's categorization of this, not mine. I can also kind of see that, but honestly, I don't really buy it. Whatever expectations people went in with are their own, and mine were that it was going to be an end-of-the-world type of scenario with some kind of massive virus or plague infecting the planet on a global scale and it's up to Brad Pitt, who apparently is good at this sort of thing, to find out what this virus is and to find a cure before the entire world population is turned into zombies. And that's exactly what this was, no more and no less.

For me, what works best for the film overall is that it starts off immediately once the film begins and never lets up it's intensity for the duration of the entire film, except for the last act, when it gets more into "suspense" mode, which is fine because it works effectively well. But seriously, I was on the edge of my seat the entire fuckin' time and that, more than anything, surprised the hell out of me. We're not treated to some slow buildup exposition in the beginning showing us what Pitt's character does, or should I say "used" to do. In fact, we're never really told why he's so important until a good halfway through. Instead it's just another day when suddenly the shit hits the fan and we're thrown into WWZ. Literally, that's in the first 5 minutes. Chaos, destruction, panic and confusion. That's my kind of zombie flick. And I'm not sure what all the flack was about when people were saying there wasn't enough zombie action. I don't know what film they were watching but from my experience, there was nothing "but" zombie action from beginning to end. The general consensus was that this was just "Meh", or "Just alright". So I honestly didn't have very high expectations for this at all. Needless to say, I was pleasantly surprised by the experience. All in all, a fun solid zombie thriller.

What I loved about this was that we're thrown into this world of chaos almost immediately and nobody really knows for quite some time whether we're dealing with some kind of virus, disease or epidemic. And the word "zombie" doesn't get tossed around for a long while, and when it finally does, it's cautiously. It seems to be the last thing people want to deal with, or believe in for that matter. And when it does come right down to the fact that we are actually dealing with zombies, it's a different take than what we're used to. They're fast, lethal and when bitten, turn you within a matter of seconds. I guess they would compare most notably to the ones in 28 Days Later. The only real gripe I would have is that while it's done extremely well, a "lot" of the zombie action is CGI. It's not cheap looking or bad, but it's noticeable regardless.

So let's end this with a small discussion on director Marc Forster's career. Consistency is not his strong point. His output so far has been eclectic with varying results. For my money, he's been a hit or miss director. He never seems to stick with one particular identifiable style. You'll never look at his films and say "That's a Marc Forster film". Never gonna happen. Some of his films look sloppy, and some look really nice. But he does deliver from time to time, with Stranger Than Fiction being a personal favorite, and well I think WWZ will be a close second in his filmography. To date, I believe his contribution to the new Daniel Craig starring James Bond films has been the least favorite for the general public. But with WWZ, he keeps it clean and steady; not over stylized and not gritty either. So on the technical side, I have to commend him for that.

All in all, a much better film than I was expecting to get. Thoughts? Comment people!
Posted by robotGEEK at 2:59 PM