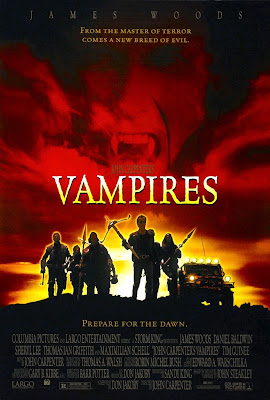 As I quench my thirst for more John Carpenter films, we now get into Vampires.

As with about half of his films, I initially saw this when it first hit theaters, but remember very little about it and have never given it another shot until now. I don't know why my brain works that way; it just does. I guess at the time it didn't make much of an impression on me. One thing I've learned though, that is usually the case with many of his films.

Vampires is a film I'm finding really hard to get on board with 100%. For the most part, I liked it quite a bit. James Woods was an awesome tough asshole. The practical effects by KNB were top notch. I like the concept. I like the slight western style setting. I even like Thomas Ian Griffith as the main vampire. For about 95% of the time this looks like a classic John Carpenter film. But it's that other 5% that really gets me. Because you know it could be better, and all budget restraints aside, he's done more with less.

Another issue I had was that the film just had so much more energy when he had his full crew in the beginning, before they left the film after about 20 minutes. These guys were cool man, and I really wish they had stuck around for the majority of the film. Unfortunately they don't, and the film suffers for it. What's weird, and I almost hate to say it, but this has a very From Dusk Till Dawn vibe to it, which came out only 2 years earlier. That's just me though. I'm not saying it influenced this film in any way or anything like that, just that it had a similar look and feel to it at times.

Thomas Ian Griffith was cool as the ancient vampire Valek, only he didn't have much to do. I've seen him in plenty of films, and it just kind of felt like a waist to just have him show up hissing and killing people left and right and then disappear again for a good chunk of the film. But those are my only real complaints in the bitching department because overall, it was a pretty fun ride. You'd never guess that just 2 years before he had made the gawd awful Escape from L.A. Vampires is a fun film oozing with a gritty western style, just not a lot of substance. Maybe that's why I can't really find a lot to say about it other than it was a well shot and well executed western style vampire film; but it could have been better. You constantly feel like it's missing something.

Next up in my John Carpenter binge; Memoirs of an Invisible Man. Stay tuned!
Posted by robotGEEK at 9:25 PM