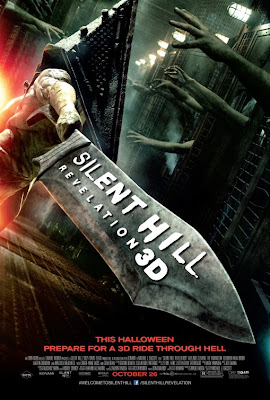 So let's see how much of this I can knock out being semi drunk on some really good wine. Sitting here watching a few horror films tonight it dawned on me that I never got around to doing a quick review on this one, which I just happened to finally see a few weeks ago. Was it good? Did it suck? Do you even care? Well let's find out.

I"ll be the first to say that I'm not a gamer and I know nothing about the whole Silent Hill lore, other than I saw the first film. So that's where I was at when I decided to give this one a shot. I heard all the rumblings on the interwebs and though they were coming from hardcore and die-hard Silent Hill game fans, I thought I'd go into this as just a lover of film. You see, even if a film is bad, I can appreciate the talent that goes behind it if it's an awesome looking film. Sure the story can make no sense and some of the logic will drive you nuts, but if it's beautifully shot from a talented visualist, well sometimes that's all I need for a good time. I've loved many a film just based on how great it looks, especially in the horror genre. Because come on, sometimes all a good horror film needs is some awesome gore, some great visuals and to just keep you entertained for most of the film and you're hooked. So where does Silent Hill fare?

I'll be honest, I remember almost nothing from the original film other than it was based on a popular video game and directed by the frenchman who helmed the awesome The Brotherhood of the Wolf. I figured "hey, this guy knows how to make a film look good, so it can't be that bad...right?". Pretty fare assumption if you ask me. Yea, it looked great overall, had some haunting visual eye candy and all that, but I honestly don't remember much about it. But that could be because I saw it when it was first released and not since then. Overall, not much of an impression was left to say the least.

So here we are with the 3D sequel made 6 years after the original. Right off the bat, the 1st thing that struck me was that this was directed by the same guy who did Solomon Kane, which I had just got done seeing and which I really, really enjoyed. So I got excited, even though the word on the street was that this sucked. Well overall, I enjoyed it as a surreal horror film. What's interesting is that this had a completely different aesthetic in terms of visuals from director Michael J. Bassett. This looked nothing like Solomon Kane, nor did it possess any of that particular style of camera work, something I was actually looking forward to. Instead he goes for a much more subdued and darker tone without a lot of the fluid and sweeping panoramic tracking shots. Basically, he makes it look like any other new horror director had made this. Not always a smart move when you want to make a name for yourself in the film industry. I was immensely impressed with his visual eye candy with Solomon Kane, less so with this. But that's not to say this didn't have it's moments, because it did. It just didn't "Wow" me as much as I had hoped it would.

Another thing I was worried about is whether I'd be lost not having remembered much from the first film. That's not really an issue with this one. You get caught up fairly quickly on what's going on and if you are lost for a bit in the beginning, they do they're best to catch you up with backstory early on.

With that being said, Silent Hill: Revelation definitely has it's moments. A few standout sequences, some outstanding effects work and creature design work, and some interesting casting choices make this one completely watchable. Will I ever see it again? Probably not. It didn't convert me and make me want to run out and play some of the games or anything, but I had a good time watching it regardless. Thoughts?