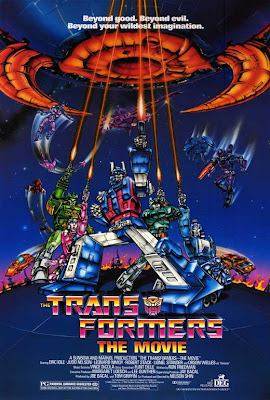 This is basically a "dream" list of mine. Films that have not yet gotten the Blu-ray treatment and have no plans to in the near future. But with the recent awesome releases of unknown and forgotten gems from companies like Shout! Factory, I can't help but get excited at the thought that maybe one day one of these few will get the special treatment. One can only hope.

This would probably be number 1 on my list of "dream" Blu-ray releases. I mean, I'm sure it's going to happen, it's inevitable I suppose. This property is huge and with each new Michael Bay live action film that comes out, I'm constantly shocked that no one has released this on Blu-ray yet. It's just dying to get the Blu treatment, if ever there was a film.

Transformers The Movie is without a doubt one of my favorite animated films of all time. And just in terms of the Transformers universe in general, this is the best interpretation. It's surprisingly violent considering this is a kids property and also taking into account this was 1986. It's got a vicious pace with some intense sequences that always surprise me. Top notch clean animation and a thunderous rockin' 80's soundtrack only make this 100% certified Badass. The 20th Anniversary DVD edition released in 2006 is pretty good. with a decent picture quality and a healthy dose of extras. But I'd be fine without the extras if they were to clean this baby up for Blu-ray.
It bothers me so much these days that whenever anybody mentions Transformers, their mind automatically now goes to Michael Bay's films rather than this film or even the original cartoon. This needs to reemerge for a new audience to appreciate and to remind people that there was life in The Transformers universe before Bay turned the franchise into a mess. 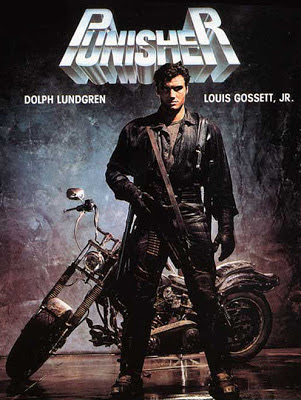 This. This just has to happen. This just needs the badass treatment. Whether you love or hate this as an official "Punisher" film, you can't deny that this isn't one helluva badass action film in general. Relentless, violent and certainly entertaining, Dolph Lundgren was just awesome as The Punisher. I know, I know. He didn't have the trademark costume, was considerably thinner than usual, and in the official U.S. release, there was barely a glimpse of Frank Castle. But duuuuude, this movie rocks with solid action from beginning to end.

I 'd love to see this get cleaned up for Blu, include some interviews, maybe some on set footage and a trailer for sure. But most of all, I'd want to see the U.S. cut along with the full uncut version in here as well that has become legendary. I don't think these extra scenes make the film any better, but more people need to see them. And there is a lot of extra footage. If I remember correctly, just the beginning alone had something like 30 extra minutes. Personally, after having seen the extended version, I still prefer the U.S. cut. While cool to see all that footage of Lundgren as Frank Castle, I didn't necessarily feel it added anything to the film.

For all things Punisher here on robotGEEK'S Cult Cinema, here are some links: 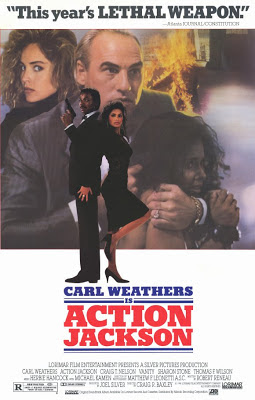 Aaaaaahhhh I loooooove this film so damn much. To the average moviegoer, this looks like a standard 80's action film. But to the filmgeek, this is so much more. I would actually considered this a bonafide Blaxpoitation film. This has all the elements; ridiculous action, hot chicks, a bigger than life titular character, and just his fucking name.....Action Jackson. It doesn't get any better than that!

Directed by legendary stunt coordinator turned action director Craig R. Baxley, who also gave us the triple threat of Action Jackson, I Come in Peace aka Dark Angel and Stone Cold before converting to television work, Action Jackson is an amazing piece of Badass Cinema. His stunt work and direction are top notch and the score by Michael Kamen and Herbie Hancock add that special touch to an already awesome film.

Being one of my absolute favorite action films of all time, one thing that "always" bothered me was that this has never been available in widescreen. VHS, DVD and Laserdisc all come in annoying full frame or pan and scan and even the DVD has nothing in the way of extras. I did see it on Netflix Instant once and to my disbelief, it was shockingly in widescreen. I couldn't believe it. It looked amazing. I'd say it's about time this one got the Blu ray treatment. 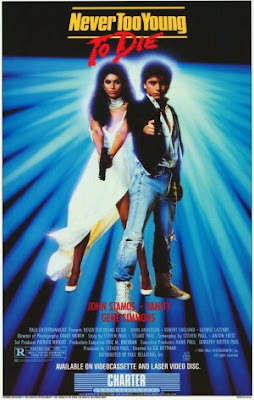 Words alone cannot explain this film. This truly is a piece of cinema that needs, no.....begs, to be seen.

I remember this when it first hit VHS way back in the mid 80's, but remember virtually nothing about it other than it starred John Stamos and Gene Simmons (KISS). But when my VHS obsession began a year ago I tracked this sucker down and let me tell you, I was not prepared for what I was about to see. This is without a doubt one of the biggest "WTF?!" movies I have ever seen. It's hard to explain and it's hard to wonder what the filmmaking team was thinking when they were making this. At times it's like a low-budget mash-up of James Bond and Mad Max (that alone is strange enough). At other times it feels like another film entirely. It's completely and utterly ridiculous from start to finish, but it's got nice production value and it's competently made, which throws you off. John Stamos's character is named Stargrove. Gene Simmons plays a hermaphrodite lounge singing villain named Velvet Von Ragnar. Seriously. Vanity appears throughout either half naked or just naked. Nice. And well, what can I say. I love this film to death. It has everything you want for an awesome time.

This has never been officially released on DVD, and there's no widescreen print of this available anywhere. Not even on Laserdisc, which typically sells for the insane amount of $100 a pop. The VHS though is fairly cheap and easy to get. This just needs a proper release in it's proper aspect ratio and considering it's never been released on DVD at all, what better time than now. 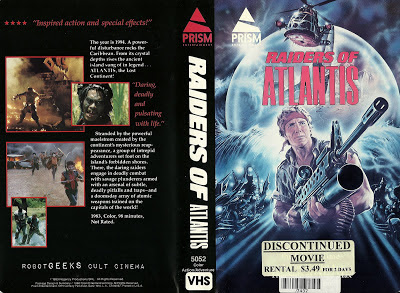 Oh wow. What a gem in the Trash Cinema genre this one is.

Directed by Cannibal Holocaust director Ruggero Deodato and shamelessly ripping off everything from Mad Max, Indiana Jones, Night of the Living Dead to Assault on Precinct 13 and everything in between, Raiders of Atlantis aka Atlantis Inferno is one of the best examples of Trash Cinema if ever there was one.

This has been released countless times on VHS all over the world, of which I own many. But so far to my knowledge, the Greek VHS release is the only one I've found in letterbox format. So it is possible and it is available that way. Some online sellers have even converted this Greek VHS release onto DVD making it easily available for purchase from major online outlets. But I'd still like a cleaned up Blu-ray edition in widescreen because as ridiculous as this film is, it's soooooo much fun. It would be fun to see some onset footage or even some old interviews and even a trailer for this one. Someone buy the rights and release this now!
Posted by robotGEEK at 12:59 PM