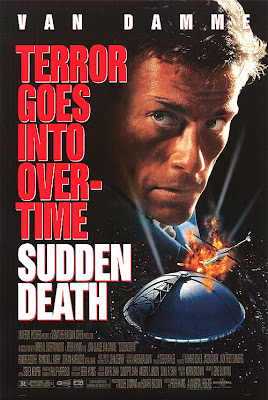 Why oh why have I waited until now to finally see this film?!
I honestly couldn't tell you. It's just one of those that passed me by for one reason or another. And the fact that it's not one of his better known films or biggest films is probably another, yet after seeing it I can't understand why. I mean, this film is straight up 100% certified badass, plain and simple with a high degree of rewatchability. For me anyway.

I've always been a fan of director Peter Hyams. Outland, Timecop, Running Scared and Hell, even The Presidio and Stay Tuned are films I like very much. What I also like and admire greatly is that he's always his own Director of Photography. Something that's rarely ever done by the director himself. But of course, he's not always at the top of his game, and has made a few missteps along the way.

Stylistically, this is one of Hyams better films. He keeps the film looking tight and clean and shows the guy is good at what he does. I couldn't help but think as I was watching this that he could certainly handle a Die Hard film or even one of the Lethal Weapons. I've always wondered why his career never got as big as it should have been. If anything, this and Timecop (another Van Damme collaboration) prove he's more than capable of handling the big stuff. I guess we'll never know. But hey, at least we have Sudden Death, one of the better "Die Hard on a......" clones to come out during this era. Do you remember this period? Speed was "Die Hard on a bus". Under Siege was "Die Hard on a ship". And so on and so on. So that would make this one "Die Hard in a hockey rink stadium". Speaking of which, I had read in Vern's Yippee Ki-Yay Moviegoer!: Writings on Bruce Willis, Badass Cinema and other important topics that this was actually supposed to be a Die Hard film at one point. I could see that. It certainly has a lot of the same elements and definitely has a lot of talent to make that happen. Van Damme is no Bruce Willis, but I thought he did fine as the "hero at the right place at the wrong time". Sure, he has much more dialogue in this one than he did in others around this time, so his delivery is not all that great, but who cares?
What's interesting is that now Van Damme is making films for Peter Hyams son John Hyams, who has directed him now in 3 films with Universal Soldier: Regeneration, Dragon Eyes and Universal Soldier: Day of Reckoning.

So I'm not going to bother with a synopsis or anything because like I said, it's basically "Die Hard in a hockey rink". Sure it's a tired formula by now, but it works. Plenty of suspense, plenty of action, plenty of fights and again, Van Damme delivering the goods, which is all you really want in any Van Damme flick. You've also got a solid supporting cast surrounding him, with the standout being Powers Boothe as the main villain and all around son of a bitch. I'm still surprised this hasn't gotten the recognition it deserves. I thoroughly enjoyed it and now consider it one of my favorites from his Golden Age. If you've never seen it, I strongly suggest giving it a chance. It's pretty solid. If you have but it's been a long while, give it another chance. I think you'll be as thoroughly impressed as I was. This was just badass.