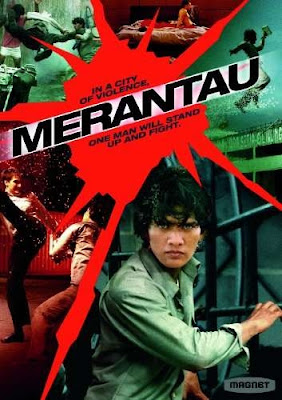 One things for sure, I sure as hell don't see enough Indonesian flicks. But then again, chances are most of them won't be as good or as awesome as Merantau.

Ok, so maybe it's not a 100% Indonesian film since Gareth Evans, the writer/director/editor of this film is Welsh, but the cast (save for the 2 main villains who are Danish and French), setting, culture, there form of martial arts-Silat, and language are Indonesian, so I would say it qualifies as 90% Indonesian. But I'm getting off track here because who cares, Merantau was awesome and everybody needs to see this film. I don't even know where to begin in describing the onslaught of insane martial arts displayed in here as well as it's star Iko Uwais, who had never been in a film before and who was only chosen to star in this thing after the films writer/director Gareth Evans happened upon meeting him by sheer chance as he was working on a documentary on Silat, an Indigenous form of martial arts that's prominently displayed in Merantau.

Yuda (Iko Uwais) is a young man from a small village who leaves on his quest of Merantau, a rite-of-passage that every young man from that village must take before becoming a man by leaving the small village life and venture out into the real world to make a name for themselves before returning home. As he arrives in the city of Jakarta, immediately things aren't working out for him. His pre-designated apartment is gone, leaving him without a place to live and without a job. He soon is pick-pocketed by a young boy and when he chases the boy down, happens across the boys older sister who is getting roughed up in an alley by her pimp. Yuda intervenes, beating up her pimp and setting off a series of events that thrusts him into the world of human trafficking and the ringleaders who want him dead.


Words cannot describe how insanely badass this film is. Iko Uwais is a star in the making. The guy is such a natural in front of the camera that I'm frankly shocked that he isn't a trained actor or has never been in a film before. I never would have guessed that if I hadn't had read up on it. And his Silat skills are nothing short of amazing. The guy can kick some serious ass and the last time I was impressed like this was the first time I ever saw Tony Jaa in Ong Bak way back in the day. The stunt work on display here is also incredible. While there is a little wire-work used here and there, it's very minimal and unless your looking for it, you probably won't notice it because director Gareth Evans films everything at such a break-neck speed that the pace of this film is unrelenting. 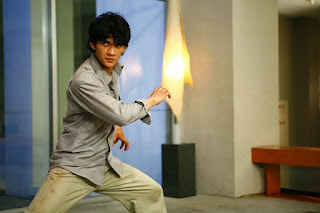 Merantau is almost 2 different films split right down the middle. The first half is pure dramatic backstory as it shows Yuda living in his small village preparing to leave. Then he reaches the city of Jakarta and nothing seems to be going right. And it's not until you see him beat down that pimp in the alley way that you really see any kind of martial arts, even then it's very brief. But the thing about this first half of the film is that it's so beautifully shot, with lush cinematography of the gorgeous landscape and even of the bustling city of Jakarta. Really beautiful and stunning camera work for sure. And I'll be honest and say that it was during this first half also that I was a little let down because I thought I was going into a martial arts film, much like the cover art implies, because going into this I knew almost nothing about it. I knew it had a cool name, had a cool cover which showed some kind of action going on and that it was Indonesian.

BUT!!!
Right at the 40 minute mark, right when I was thinking that maybe this wasn't the film I thought it was going to be, something really amazing happened. Yuda is calling his mom from a payphone on the side of the road in the middle of the night to tell her that nothing is going right and maybe he should come home. But while he's on the phone he sees that pimp again, and he's got that girl that he had saved previously before, only this time the pimp has about 5 guys with him. Yuda hangs up the phone and confronts them in the alley displaying some truly impressive martial arts skill. Only he doesn't win. Ultimately 5 guys against one seemed too much for Yuda and he's taken down to the ground. As the pimp, his men and the girl walk back into the club from the alley, Yuda gets up in slow motion. He's defeated and angry. During this awesome slow-motion shot, Yuda composes himself, takes a deep breath and walks into the strip club where the pimp took the girl. The second Yuda steps into that club Merantau becomes a tour de force of badassery and does...not...let...up for the entirety of the next hour. I'm telling you, you barely get a second to catch your breath or even try to digest the awesome fight you just saw when another even bigger and better fight comes outta nowhere to blow your mind.

And that's how the second half of Merantau plays out, as one of the best martial arts films you've ever seen and one of the most awesomely photographed with one mind blowing and bone crunching martial arts sequence after another. Welsh director Gareth Evans has only made one other film before this, but you'd never have guessed it. The guy is a master visualist, whether it's in dealing with the martial arts sequences or with any of the other sequences in general: the guy has an incredible eye for visuals. And one of the most important things to mention is that when dealing with the fight scenes, he never reverts to slow-motion. He uses it in other scenes to great effect, but with the action he keeps it fast and furious, just the way we like it. And I just can't say enough about the star of the film, Iko Uwais. The guy, though very unassuming, is so incredibly badass in this. His Silat skills are bloody amazing. I hope this guy's career becomes huge, because he deserves it and he's definitely someone to keep your eye on in the future. He and writer/director Gareth Evans already have another film under there belt with The Raid, which should be coming out soon if it has not yet already. You can count me as super stoked for that one.

I don't really want to go into anymore details about the story or what ultimately unfolds in the second half because the less you know, the better. I was constantly and pleasantly surprised at almost every turn that the film took in the second half with everything in regards to casting, story, action, violence and so forth. So that's something that I feel should best be experienced visually instead of me possibly ruining it for you if you haven't yet had a chance to see this amazing martial arts film. Merantau literally blew me away and you deserve the chance to experience that opportunity for yourself as well.
Posted by robotGEEK at 2:11 PM