Quick Shot: The Girl with the Dragon Tattoo (2011) 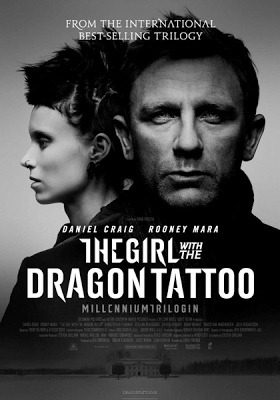 I held off on seeing this one up until recently. Even with David Fincher behind the camera, I just felt that it was just too soon for a remake considering the Swedish original only came out 2 years earlier. It was still fresh in my mind. I loved that original film. I thought it was a superbly crafted thriller that kept me guessing and hooked all the way till the end. I though Noomi Rapace was simply amazing as the titular character and as much as I loved the idea of David Fincher releasing a new film, I already knew all the twists and turns that this new version would essentially take so I felt no pull to want to revisit all that again.

On a slow and quiet Sunday afternoon, knowing full well this was a 3 hour movie, I decided to give it a shot, so here it goes.

The Good:
The production value on this thing is amazing. If David Fincher is directing something, you know it's going to be beautiful. The guy has such a unique vision that even when making a film about the birth of Facebook, he can make it look amazing. The cast was pretty outstanding too. Daniel Craig, looking considerably thinner than usual when he's not playing Bond, surprisingly had the bigger role here and pulls off the character flawlessly.
The opening credit sequence was pretty outstanding; so odd, unique and surreal. Almost like it belonged in a completely different movie. I actually found that opening credit sequence the most entertaining part of the film to be honest.

The Bad:
My reservations were dead on. It all felt much too soon for an America remake. Everything was so familiar and fresh that as beautiful as everything was to look at, I found it hard to enjoy it to its full potential knowing what was going to happen at any given moment.
Though Trent Reznor again teamed with David Fincher to do the score, I didn't find anything memorable about it, unlike his Oscar winning score for Fincher's The Social Network. Really nothing memorable about any of it.
Noomi Rapace is a hard act to follow, and as hard as she tries, Rooney Mara just doesn't rise up to that level of intensity. And I never once found her intimidating or threatening. She just always seemed so frail and fragile, like a tiny little waif who couldn't hurt a fly. Putting her in oversized clothes to make her look even smaller didn't help either.

Overall a very well made film with outstanding visuals, production value and performances all around. It was just felt so unnecessary. Though they did change a few key things here and there to keep it fresh, it was just too soon if you've already seen the original and in the end, when it's all over and said and done, it didn't offer anything new to justify a remake so soon. If you haven't seen the original, then I can see this being an outstanding thriller for the casual moviegoer. There's a lot to like about this if you don't already know what's going to happen.