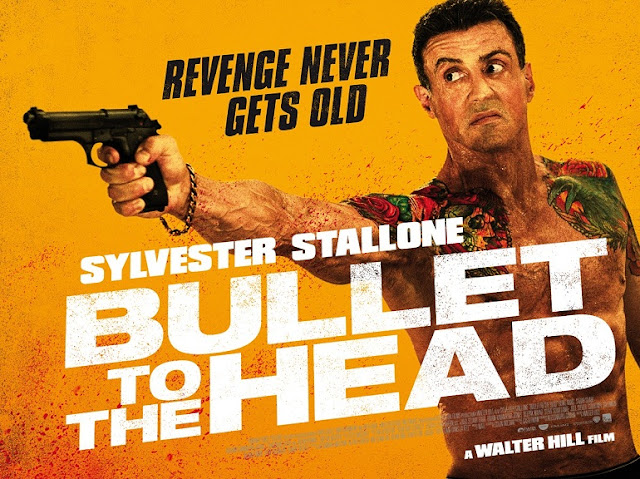 Being a huge fan of 80's and 90's action cinema, and basically growing up on the stuff for most of my life you can say I was excited about this one, as well as Schwarzenegger's recent return to the theaters literally just a few weeks before in two seemingly old school type of action films. So I hit up the theater last night with a buddy to check this new Stallone vehicle out. The trailers looked promising, and add to that my deep man-love for director Walter Hill and well, I just had to go see this. Mainly though, I think it was more of a show of support for this action legend after knowing that this as well as Schwarzenegger's recent film both bombed at the box office. Hell, The Last Stand isn't even playing in my local cinema anymore, just a few weeks after it premiered! So what did I think of Bullet to the Head?

First and foremost, I need to be honest. I have conflicting feelings about this one. There were things I both liked and disliked about this film, though I think I'm leaning more towards the fact that I ultimately liked it more than disliked it.

The good:
This is a straight forward paint-by-numbers action film. I mean, it's as paint-by-numbers as it could possibly get. There's nothing overly exciting about this film and it doesn't possess any kind of insane action sequences, stunts, explosions or anything like that. But that's a good thing. With so many action films going so over the top to outdo each other in the action area or to offer something new, it was nice to see a simple action film without any special effects or outlandish action set pieces. More than anything, this felt like an old school action film. The kind they simply just don't make anymore.

Stallone. Stallone is a fucking badass in this film. Tough, brutal, and one nasty son of a bitch. For me, that's what drove this baby home. Even with his old gravely voice voice-over narration, it just works. It's the kind of role I hadn't seen him play in a very long time and it was refreshing. He's not the hero. He's not superhuman. He's not playing for laughs. He's a bad guy caught up in a bad situation only made worse when his daughter is kidnapped as leverage. Then he get's pissed, which turns him into an even bigger asshole hell bent on revenge.

The Bad:
As painful as it is for me to say this, director Walter Hill really let me down on this one. Ouch! Walter Hill is responsible for some of my favorite action films of the 80's with entries like The Warriors, Red Heat, Extreme Prejudice, Johnny Handsome and the two 48 Hours films. He hasn't directed a big budget film since 2002's disappointing Undisputed over 10 years ago and was lured back with this film. So naturally any filmgeek with a love of action could only get excited. The problem is that the Walter Hill that directed those earlier 80's gems with so much style and substance is gone. This doesn't look nor feel like a Walter Hill film. Back in the day, that was something you could easily say. You could easily identify a "Walter Hill film". Here, in all honesty, it looked like "any" no name director or newcomer could have helmed this thing. There are no identifiable trademarks and absolutely zero visual flare. Just to drive my point further, you could easily have assumed Renny Harlin directed this. No style, lots of hand held crap (no shaky-cam thank god), lots of quick jumpy edits between sequences and too much reliability on CGI blood. I did see a few authentic squibs here and there, a cool autopsy scene, and some genuinely cool headshots, but too much of an overabundance on CGI bullet hits.

The fight scenes also gave me a headache. Too much hyper-kinetic quick-cut editing and hand-held camerawork made them so confusing and nausea inducing to really enjoy.
All in all, it was just so disappointing that it didn't look as good as it could have. Considering an action legend was behind the camera.

Sung Kang, who plays the cop that Stallone's hitman character teams up with was just so unimpressive and annoying at times. The annoying bits you can blame on the script, but as far as a presence goes, he just left a very unmemorable performance.

With all my gripes about the visual quality and overdone CGI violence, this honestly could have easily gone Straight-to-DVD. That's the kind of film it looked like. And in all honesty, it probably could have made more money that way since people or action fans in general aren't willing to fork over $10 for movie ticket these days for films like this. 20 years ago, absolutely since prices were about half of what they are now for an evening ticket. But when you're on a budget, even $10 can be a lot for a film without a huge payoff.

Final Analysis:
Overall I liked it quite a bit. Stallone was a badass and I loved seeing him play this character up on the big screen. I wish it had looked a helluva lot better than it did though. That's my biggest gripe. I think a more "visual" impact would have greatly affected the overall outcome of this film. Not at the box office, but in terms of the experience. There were so many times I was squirming in my seat because I knew that if just a little more effort had been put into the look of a scene or sequence, it would have come off so much better and with much more of an impact.
Posted by robotGEEK at 10:55 AM