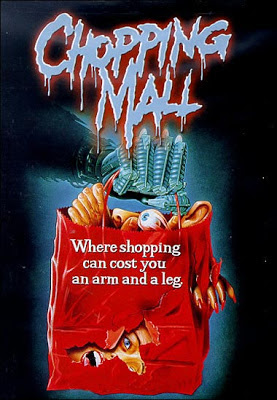 You know when you randomly pick a movie for whatever reason to watch? You know, it looks ridiculous and you're pretty sure it's going to be bad but maybe by some miracle it will fall into the "So Bad it's Good" category? Well this is that movie.

Words cannot describe how amazing this movie is. I mean, they just can't. What about that title? Is that just not brilliant?! I was just totally unprepared at the high entertainment value this was going to unleash. Logically and realistically, it's a low budget horror film circa 1986. I even remember renting this with a buddy when we were about 11 or 12 back then when it first hit VHS and his mom not caring what the fuck we watched and digging that sex scene in the furniture store where one woman screams "You're the king!". Ahem, anyway.

This has everything you'd want in a "So Bad it's Good" movie. Bad acting, bad 80's clothes!, ridiculous plot. But the thing about this is that it's all put together so well! Director Jim Wynorski is not known for turning out winners, but somehow the stars aligned at just the right time for this one because lo and behold, this thing looks shockingly impressive. Not spectacular or epic or anything like that, but for a low budget horror film it looks a lot better than it deserves to. It's ridiculously 80's setting only adds to it's charm. Add to that some pretty decent effects and just an all around fun vibe where it never slows down for more than a few minutes and it makes for the perfect film to watch with friends and a healthy dose of alcohol. This is "that" movie.

Basic plot is as follows: A group of annoying 80's 20 something's who all work at a mall decide to throw a secret party after the mall closes for the night. Unfortunately for them, the new robots they installed for security go on the fritz and start killing them off one by one in bloody and gory fashion. All they have are the supplies at their disposal in the mall and their wits. They just need to make it through the night until the mall reopens in the morning.


Check out this awesome trailer from YouTube user themaybatatter. This is great. Re-cut with an awesome score makes this thing look so much more epic than it really is. Way cool.

Really fun film from beginning to end. Thankfully, this is very easy to find and very cheap, so I recommend you grab one ASAP and enjoy!
Posted by robotGEEK at 11:02 AM