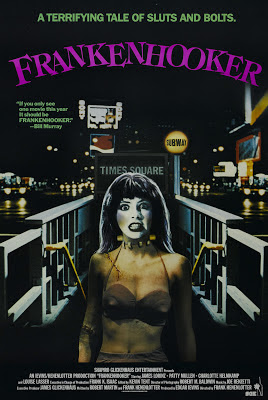 I wouldn't call this a horror film as it's more of an excuse to show off some bugnuts insane crazy effects and a completely ridiculous storyline with equally ridiculous scenarios. But you know what? It works. It's fun, and obviously doesn't take itself seriously at all so what would you expect from a film titled Frankenhooker?

I will say this, my expectations were indeed exceeded by the sheer amount of balls Henenlotter (Basket Case 1, 2, 3, Brain Damage) and company displayed by making this thing. It's an acquired taste, definitely. But watch it with the right company, with the right amount of alcohol and this thing is a blast. One of the better "So Bad It's Good" horror films out there and one I'll probably revisit from time to time.

Do I even need to bother with a synopsis? Okay, here's a quick one. Average New Jersey girl gets cut to pieces by her nerdy boyfriends automatic lawnmower invention. Nerdy, slightly insane boyfriend decides to bring her back to life by killing and cutting up hookers for body parts and preserving his dead girlfriends head and brain. Only problem is that by taking on all these random hooker body parts, she's also acquiring all of there tricks and trades naturally making her a hooker at heart.

This was really fun. Though made in 1989 and released in 1990, it looks and feels like something from 1982, which only adds to its' charm. Throw in some truly horrendous acting from a plethora of non-actors and casting the truly hot Patty Mullen in the lead with surprisingly good comedic skills and it all makes for a good time. The effects were pretty inventive and impressive considering the budget, and Henenlotter's direction is what you'd expect it to be, competent for the most part considering the material.

If anything, this is worth a viewing if for nothing other than the scene in the hotel room where a half a dozen or so naked hookers spontaneously explode. I mean, there's no other way to describe it. You just have to see it to believe it. It's pretty far out there and it's spectacular.