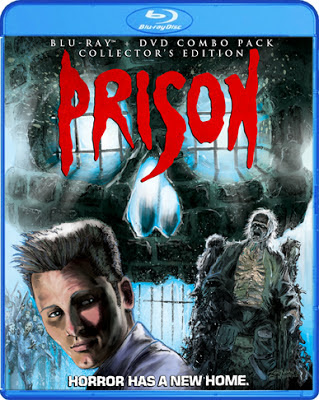 Renny Harlin's Prison (1988) is an underrated gem. Released in 1988, the same year he also made A Nightmare on Elm Street 4: The Dream Master, Prison is a visually impressive little seen film that flew under the radar. This was Harlin's first foray into American horror before he delved straight into action a few years later with films like Die Hard 2, The Adventures of Ford Fairlane , Cliffhanger and The Long Kiss Goodnight. To be honest, he hasn't made a decent film since 1996, with the late 80's through the 90's being his best output, but I still hold out hope that the guy can once again deliver a solid action film. Yet, I'm cautious because I'm not digging the new style of filmmaking he's adopted lately and fear the the king of slow-mo who gave us these solid films is long gone.

I love Prison. It's beautifully shot, atmospheric and with a healthy dose of decent effects. More than anything, you'll immediately notice that this thing looks beautiful. This was when Harlin had something to prove though so he went all out to make this thing look amazing and he certainly succeeds.
You can check out my review from back in Sept. '11 here:
http://robotgeekscultcinema.blogspot.com/2011/09/review-prison.html

Prison is set to release in the U.S. on February 19, 2013.
I've been waiting many, many years for this to get an official release since all we've had up until now was a VHS and Laserdisc release, none in a proper aspect ratio. So once again Shout! Factory delivers another amazing release to add to their already impressive recent and upcoming releases. Finally we get a beautiful high def transfer but also a new documentary and a few other special features. Plus! If you pre-order, you get a limited edition poster!

Here are the specs via Shout! Factory:

FROM THE PRODUCER OF HALLOWEEN COMES A NEW FORCE OF EVIL

Creedmore Prison becomes a supernatural battleground when the specter of Charlie Forsythe, a man executed for murder, returns seeking vengeance from the brutal guard, Ethan Sharpe, who was aware of his innocence. The lives of the inmates hang in the balance as Forsythe and Sharpe lock in demonic combat. Directed by Renny Harlin (Cliffhanger, A Nightmare on Elm Street 4: The Dream Master, Deep Blue Sea). Starring Viggo Mortensen (A History Of Violence, Eastern Promises), Chelsea Field (Dust Devil, The Dark Half) and Lane Smith (Red Dawn).

Posted by robotGEEK at 7:07 AM