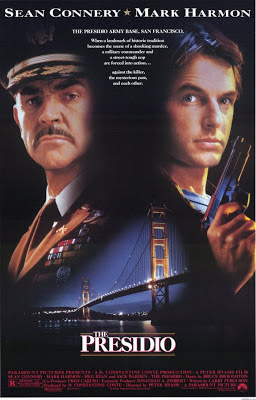 This was a film I never felt the urge to watch ever since it was released. I don't know, the cover just doesn't do it for me, neither does the title. But as an adult, I love classic Peter Hyams films, no matter what the genre is. The guy was such an accomplished filmmaker in his prime, the 1980's and 1990's. Running Scared, Sudden Death, Timecop, Outland, 2010, all great fun films and visually an unmistakable Peter Hyams film.

So yea, then there's The Presidio, tucked away in his filmography between Running Scared and Timecop. One of the things I love about Netflix Instant is that it gives me the opportunity to watch films that I would not have given a second thought to. Films like this. Yet, as I browse occasionally when I'm looking for something to watch or play in the background, they suggest films to me based on my viewing history and this one popped up. I was intrigued. And I was also in the mood or something light and simple. An old school style thriller from the 80's, and this one certainly fit the bill. How was it? Here we go.

I actually liked this one a lot. It's a simply paint-by-numbers thriller about a civilian detective (Harmon), who teams up with a Colonel (Connery), his former commanding officer, to investigate the death of a soldier on base. There's nothing flashy or complex about this film at all. Nothing that makes it stand out from all the others that would make you remember it. But I think that's why I liked it so much. It's a competently made thriller with a visual panache, as Hyams is certainly capable of when he's running on all cylinders. There are no big action sequences or explosions or anything like that, but there is a good foot chase and small car chase sequence thrown in there, along with the films final showdown sequence, which was entertaining enough that it made up for the lack of any action for the majority of the film. But that's still not a complaint because I never got bored. All the leads were great, the film looked amazing and it possesses that old school "feel" about it.

There is one scene that will always stand out for me. It offers nothing to the film in general and is in reality a filler shot of someone walking up a flight of stairs outside an apartment building. It's the angle Hyams chose, the way he shot it and how he framed it that make it so amazing and why I love the way he directs films. It's a shot nobody would or should care about, but I do because it's a testament to this guy's talent as a director with enough visual ingenuity that he can make something so simple look so amazing.

For me, this was a great way to spend 90 minutes late at night. It reminded me of how films used to be made. Simple effective stories and execution. Oh, and before I forget. There's a scene where Sean Connery's character actually beats the shit out of a bigger dude in a bar by simply using his thumb. The best part is that he actually tells the poor schlob this before he does it. He tells him that he's going to beat the shit out of him by simply using his thumb, so at least the guy knew what he had coming. It needs to be seen to be believed, and it was definitely awesome.

Posted by robotGEEK at 6:16 PM