Joshua Tree aka Army of One Blu-ray/DVD release! 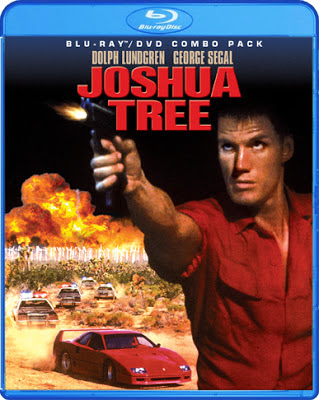 I love this film!!!
As much as I love me some solid Dolph Lundgren action, I had only ever heard of this film in 2011. How it passed me by, I have no idea. But I have to say that this easily ranks as one of his best and one of my favorite Dolph Lundgren films.

For a quick recap of my review, click here.

I don't know the whole history or particular's of this film in great detail, but what I do know is that this came out in 1993, the year after Universal Soldier. And apparently this never got a theatrical release, so this kind of began his career in the DTV era. It's directed by legendary stunt coordinator Vic Armstrong (his one and only feature film to his credit as a director) and features an awesome amount of stunts and solid action. It appears to be known as Army of One only in the U.S., but as Joshua Tree everywhere else. Above all though this is a solid piece of Badass Cinema. The kind of action stunt film they haven't made in decades. The kind with real squibs, real stuntwork and not a single trace of CGI.

Shout! Factory is releasing this on February 26, 2013 under the International title Joshua Tree with a widescreen presentation (not available until this release) and a healthy dose of extras.

You can purchase this directly from their website here.

Here are the specs:


Sometimes one man is all it takes.

It’s high-caliber action from start to finish when exotic car runner Wellman Santee (Dolph Lundgren – The Expendables) goes gunning for his money and running for his life after his partner is killed during a botched heist. Sensational stunts and spectacular special effects push the action into overdrive as he captures a beautiful hostage (Kristian Alfonso) and takes off across the desert in a high-speed chase. Six thousand square miles of sand and dozens of turbo-charged super cars set the stage for a bloody, bullet-riddled showdown with a ruthless killer.