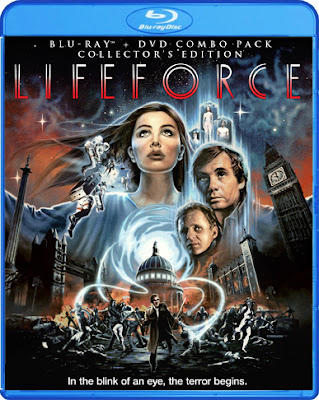 This is one I'm really excited about. One of director Tobe Hooper's less popular films from 1985, but one of my favorites from his filmography. Sure it doesn't make a whole lot of sense, is odd in some places and in all honesty, can be a mess, but it's about a hot naked vampire from space. What the Hell else do you need? And I'm not talking some quick boob action, I'm talking full on nudity and quite frequently from the insanely hot Mathilda May. Add to that Tobe Hooper's impressive visuals, the late great Dan O'Bannon (Alien, Return of the Living Dead, Total Recall) on writing duties and some outstanding special effects and you've got a fun film. Never really dug Steve Railsback in the lead because he just never seemed like leading man material and just seems out of place for most of the time, but that's a minor complaint.

Shout! Factory is releasing this and I couldn't be more pleased. I've been loving there recent horror and sci-fi releases such as the recent releases of John Carpenter's They Live, Halloween II and Halloween III: Season of the Witch, all of which I own and are great editions chock full of extras and beautiful transfers. This is set to be released on April 30th, and if you pre-order now you get an exclusive 18"x24" newly designed  limited edition (300)poster. I've already got the date saved on my calendar!


Here are the specs via Shout! Factory:

SPECIAL OFFER: Order this directly from ShoutFactory.com and receive an exclusive 18"x24" poster featuring our newly commissioned artwork! Only 300 have been printed, so these are available while supplies last.

“If you've never seen this mind-reeling schlocko sci-fi spectacular, then hang on to your brains….Great fun.” – Time Out Film Guide

From the director of Poltergeist and the co-writer of Alien comes a thrilling sci-fi adventure of explosive action and pulse-pounding suspense! With mind-blowing special effects by Academy Award® winner John Dykstra (1977 Best Visual Effects, Star Wars), Lifeforce is a gripping mélange of genres that’s “so bizarre, it’s fascinating” (Leonard Maltin)!

A mission to investigate Halley's Comet discovers an even stranger phenomenon: an alien spacecraft! Following a deadly confrontation, the aliens arrive on Earth, where their seductive leader begins a terrifying campaign to drain the lifeforce of everyone she encounters. Her victims, in turn, continue the cycle, and soon the entire planet is in mortal danger. And when the mission's sole survivor (Steve Railsback – The Stunt Man) sets out to destroy her, he comes face to face with the most charming - and horrifying – being he's ever known. Will he be able to destroy the lovely vampiress...or will he become yet another victim of her fatal charm?

Posted by robotGEEK at 7:26 AM