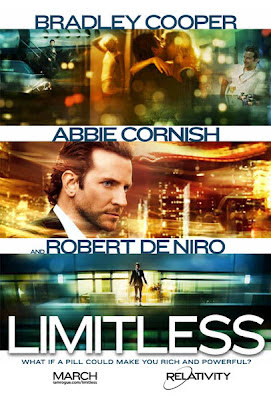 Late one night recently I found myself not being able to sleep. Frustrated, I decided to just get up at about 2:30 AM and find something to watch until I dozed off. This was one I had been meaning to visit for a while, but never got around to it. Maybe it was the annoyingly lame title? Or the blah cover art? I don't know. I just never felt the "need" to watch it. So I thought what better time than at 2:30 in the morning? If anything, it should knock me out right? Nope! I enjoyed this one so much that even though I finally started to get sleepy, I just couldn't bring myself to turn it off. I NEEDED to finish it! It was important!

Instead of making me fall asleep, it did the exact opposite and kept me completely engrossed right from the opening frames. Within the first 5 minutes I knew I was in for something special. Director Neil Burger's visuals alone and creative camera work sealed the deal for me. I can't tell you how annoyed I get with all these new filmmakers who get the job of directing any of these new thrillers, but you can't tell any of them apart because they all look and feel the same. Pierre Morel, Olivier Megaton, Jaume Collet-Serra, I'm talking about you guys. Stop shaking the damn camera on purpose!
But I genuinely found this interesting and engaging and most surprising of all, I found it stylishly and inventively directed. My enjoyment of Limitless is/was very high, and I don't now how much of that can be attributed to Bradley Cooper's acting abilities or voice over narration throughout the entire film, but for me it all worked and came together nicely.

Basically, Eddie Morra (Bradley Cooper) is a struggling and very poor writer who can't even get past his first page of his novel. Through seemingly divine intervention, he comes across a new designer drug  called NZT that let's you access 100% of your brain, since typically we only really use a tiny fraction of it's resources. This is a huge deal. Suddenly you are remembering things that were stored in your memory years ago for no reason and suddenly you have the ability to absorb all forms of information in every capacity and you're literally a genius, becoming the best possible version of yourself. As a result, Eddie is thrust into the world of high rollers and stock markets, where he catches the eye of big time mogul Carl Van Loon (Robert De Niro), who hopes to persuade Eddie to join his camp. This is all a roller coaster ride for Eddie and he's loving every second of it. Only, there are side effects. Side effects that were never mentioned to Eddie beforehand and there are also other people who want there hands on this NZT too. Bad, seedy people who don't take no for an answer.

Ultimately, this ended up being a different kind of film than I was expecting. Based on the lackluster trailers alone, I thought it was going to be about Eddie being some kind of drug dealer who created some kind of wonder drug and people were after him, or something to that effect. Not the case entirely here. What it ends up being about is a guy with confidence issues, emotional issues and worst of all, writers block. You see, he's been hired to write a novel, yet he can't even write down a single line on the first paragraph of the first page, and it's due any day now. He's so unmotivated and so lazy that his girlfriend even dumps him because he's a guy going nowhere. But he comes across this drug (rather randomly too), and the second he takes it, he's a new man. The dreary and gloomy light of his everyday experience has brightened and he's focused, motivated and on a creative high. So much so that he knocks out his first draft within hours and hands it in to his publisher the following morning, to her amazement. But that's just the tip of the iceberg. He soon finds that he's absorbing vast amounts of information from all facets of life and can use this to his advantage in almost every aspect. Before long he's a Wall Street darling, a wonderkid who's taking the financial world by storm, and nothing can stop him. Or so he thinks.

I'm not going to give you "everything" because that would most certainly spoil the experience for you. I was engaged and entertained to the fullest, and you should be too. I do know some that didn't enjoy it as  much as I did, so I'd be interested to get your take on it. I personally found it creatively written and directed, solidly acted by Cooper and company and most importantly, an entertainingly solid thriller.
Posted by robotGEEK at 4:22 PM