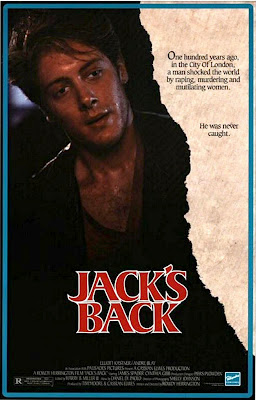 This was one of those films I always remember seeing in the video stores back in the late 80's to early 90's. I never rented it though because I mean, look at that cover. Would you rent it? How can you possibly gauge anything about this film from a picture of a sweaty James Spader?

Well this amazingly became available on Netflix Instant the other day and so I finally got the chance to check this sucker out.

Allow me a moment to blow your mind with a little tidbit of information. This is written and directed by the same guy who directed one of the manliest man films of all time, Roadhouse. I know, I know, I can't believe it either. I actually had no idea myself until recently. I mean, you'd never have guessed it by watching these two films. They couldn't be anymore different, especially when you take into consideration that Roadhouse came out only a year later. I think what surprises me most is how the producers or whoever was responsible for suggesting or hiring a director for Roadhouse saw that Herrington could deliver an authentic piece of Badass Cinema like Roadhouse simply based on this film here. I just don't see it. This is as paint-by-numbers as they come. No style, no substance and completely formulaic to a T. I often times found it extremely lagging and tedious, but because I had waited so many years to finally see it, felt the least I could do was finish it to the end, even though it felt like it was taking way too long to get there.

So what we have here is a pseudo Jack the Ripper tale. Women are being killed in the same manner, in the same order and on the same days as the supposed Jack the Ripper did so many years ago. So much so that the police can predict when the next killing will occur, but not who the victim will be. A local doctor and activist (James Spader) is at first suspected until he too is murdered. The cops soon discover that the doctor has an identical twin brother, and he too becomes suspect. Working with his late brothers coworker (Cynthia Gibb), he works to clear his name and that of his brothers while also trying to uncover the identity of the real copycat killer.

Honestly, I just found this to be so incredibly dull. They offer the usual tricks by making you think that anybody could be the copycat killer, even forcibly making you believe so. But when they finally reveal the real killer at the end, you immediately roll back in your head all the forced assumptions and most of them just don't add up or make any sense. And then, when they do offer the big reveal, it's not a big deal and you really don't care. At least, that's how I felt. The buildup is just not there, and for a thriller, there just aren't any "thrills" or suspense for that matter. James Spader does a fine job playing the Westford twins, as does the decent supporting cast, it's just the lackluster script and direction. This is pure Diret-to-video stuff. Truthfully, I should have known how lame this film was going to be simply by the opening credits song. It was pretty horrible and I should have taken a cue from that. If you can't grab an audience with a decent song or opening credit sequence then how are you going to keep them around for the rest of the film?

I remember as I was watching this realizing how incredibly late it was and all I wanted to do was go to bed. But then that would mean I would have to actually return to this to finish it and that was something I just didn't want to do. I just wanted to be done with it, so I trudged on in my sleepy annoyance. If anything, at least now I can say that I have indeed finally seen it and thank the heavens that writer/director Rowdy Herrington eventually discovered his mojo with films like Roadhouse, Gladiator and Striking Distance. But come on, all he really ever needed to do was make Roadhouse and he's cemented his place in Badass Cinema history forever.
Posted by robotGEEK at 10:55 AM