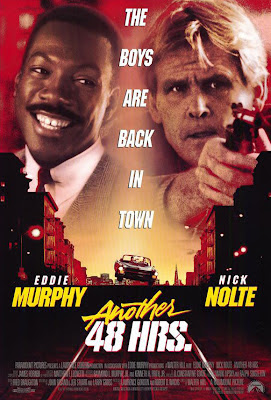 Oh man I love me some Walter Hill from time to time. The guy's a genius of Badass Cinema. Hell, just with films like Red Heat and Extreme Prejudice alone, the guy's a certified God in my book. Yet his filmography is so vast with so many more badass films to boot that it's really hard to choose just a few. Yea he's had some misses (which director hasn't), but I'm a big fan of most of it. I love the first 48 Hours, and find myself revisiting both the original and this sequel quite often. But one of the more fascinating things people might not be aware of that Badass Cinema film critic Outlaw Vern states in his review of this film, is that in that first film, there's very little action at all. I don't know if the writers of this sequel took that into consideration when penning this, but Another 48 Hours seems to have a whole lot more of it this time around, more brutal, more stylized and a lot more fun.

This one picks up about 4 years after the events of the first film. Reggie Hammond (Eddie Murphy) is just about to get out of prison when Jack Cates (Nick Nolte) finds a picture of him on a dead suspect the day before Reggie is supposed to be released, leading Jack to believe that Reggie is headed for assassination. Jack, who's still holding the thousands of dollars that Reggie entrusted to him before he went into prison, has to resort to blackmailing Reggie into helping him solve his case revolving around a figure known as The Ice Man since Reggie is still pissed at Jack for not once visiting him while he was in prison.  Pretty soon Jack's got a hit out for him as well and they soon realize they're in way over there heads.

This time around, Eddie Murphy's got top billing after the massive successes of Beverly Hills Cop 2 and Coming to America, and deservedly so. Though I don't remember this one being as big a hit as the original, but I don't see why it shouldn't be. It has a lot more action than the first, and a much harder edge with director Walter Hill adapting a different style this time around. A style he only used a few times around this period with this film and then with Trespass in 1992 before going back to his signature look. Whether you like or dislike the look is purely based on how nit-picky you are with that shit like me. Some might not even notice it, but I do and for me, I actually enjoyed it in this case. One of the things you'll immediately notice is that the action is much more exaggerated this time around. When someone gets shot, they go flying through a window, or through panes of glass that always seem to be conveniently and strategically placed for a body to go flying through. The motorcycle through the adult movie theater sequence alone is just plain ridiculous, but so much damn fun and wonderfully executed. And that's how most of the many action sequences play out in this one. Over the top and bloody as hell with no sense of reality, which is fine by me. I did feel that some of the comedy elements felt a bit forced and not as natural as the first time around when Murphy was just a newbie, but never enough to bury your face in your palms. And I don't know if it's just me, but Nolte seemed a bit off in this one too. I know the guy has battled alcohol addiction off and on, so I don't know if this was made during one of those episodes or not, but I kept thinking that he just seemed out of it on occasion, like he was actually drunk.

Adding fuel to the fire of awesomeness is screenwriter Jeb Stuart (Die Hard, Leviathan) on writing duties and along with a supporting cast of Badass Cinema character actor regulars like Brion James, Ed O'Ross, Andrew Divoff and Bernie Casey, Another 48 Hours delivers on all fronts. A great fix for your 90's cop/buddy action/comedy blues.
Posted by robotGEEK at 7:35 PM