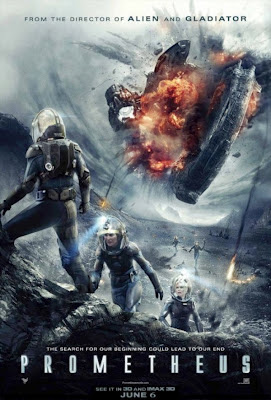 I had been meaning to get to this one for a while, but kept putting it on the back burner as I watched more and more films. I think I wanted to process everything I took in, and in the least, even try to see it again. But that doesn't look like it's going to happen so here I go.

This one seemed to have the majority of the filmgoers and critics split right down the middle. Some loved it, some hated it. With that in the back of my head, I went in with an open mind. Also, I avoided spoilers whenever I could and did not see any of the viral marketing they worked so hard on. I just wanted to go in knowing as little as possible about this, keeping it fresh. Really, the only thing I knew beforehand was that it had something to do with the "Space Jockey's", as they were known in the first Alien film, but now known as "The Engineer's".

I think I'm going to just keep this one short and sweet. If you hadn't had a chance to see this yet, the less you know going into it the better. I went in pretty much spoiler free, and so should you. So there won't be any spoilers in here, which means I won't really be able to delve into the story or plot much. This will really be about my overall feelings about it, and not an analysis.

My experience with Prometheus was of 100% fulfillment. I didn't leave the theater disappointed or let down in the least. In fact, not really going in expecting anything remarkable at all, it left me completely satisfied. I think what most people's gripe would be, and I'm just guessing, is that when you know Ridley Scott was coming back to the Alien franchise, the franchise he helped create so long ago, that you naturally expected another horror film in space, with the same kind of "truckers in space" atmosphere. Or something to that affect. I know I had partly hoped for something like that as well. But what Ridley Scott offers in Prometheus is something else entirely different, yet a combination of all the things we've come to love about the Alien film franchise. It's got some nice bits of action, some really good horror elements, and a healthy dose of thrills and suspense, all done Ridley Scott style. Admittedly, there might not be as much action as I had hoped, but that really didn't make that much of a difference to me. I enjoyed this tremendously from start to finish because most of all, it was a visual feast. Not just a visual feast, but a Ridley Scott science fiction visual feast. A very, very rare thing indeed.

I have read in several critiques and reviews that a lot of people found the dialogue to be juvenile and unintelligible. If it was, I didn't notice. I was captivated simply by the visuals, Noomi Rapace's intense performance, Charlize Theron's hard as nails bitch, Michael Fassbender's fascinating David, Idris Elba's cool as hell captain, and the intensity that Scott and company deliver to the story. I will also say, when it was all over, it left me with a lot of questions. I ended up getting into a deep and sometimes heated discussion on Facebook about what certain sequences and scenes specifically meant. It helps if you have the time to scour forums dedicated entirely to this (which a friend of mine did), but for the average moviegoer you're left scratching your head wondering what the hell it all meant? After deep thought, reflection and deep discussions, I get most of it now. But I think they purposely left a lot of it open to interpretation in the event that they decide to make another one. You know, just in case.

All in all, a brilliant, fascinating and thoroughly entertaining science fiction film done the way only Ridley Scott can deliver.
Posted by robotGEEK at 2:52 PM