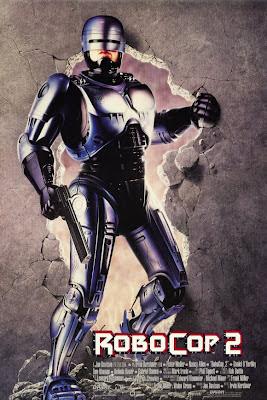 I originally reviewed this film exactly a year ago today. That knowledge wasn't even in my thought process when I decided to revisit this again the other day. This just happens to be a film I still enjoy quite a bit despite it's many flaws. It's a solid piece of sci-fi 90's action and for that reason alone, I watch it at least once a year as I do many other films. I still feel the same way I did about it when I reviewed it last year, but every viewing always brings up new little issues or significant details that can altar your perspective just a bit. For that reason alone I thought I'd throw in my two cents about something I noticed when recently watching this. It will also be an opportunity to try a new format I'd like to call "Recap", where I revisit films I've already reviewed and maybe want to add something I may have missed or even in some cases, offer a different opinion in short form. So here we go.

I love this film, but I think one of the biggest problems with Robocop 2 is that it's just too ambitious for it's own good, considering the year it was made and how CGI was in it's infancy, which lead them to have to resort to a lot of stop motion work in the end. It looks cool, but you have to wonder what it would have looked like had they made it more recently and what they could have accomplished. If you've never read Frank Miller's Robocop trade paperback, I strongly suggest you do so. It's an insane over the top plethora of action, violence and mayhem. A lot of what ultimately became Robocop 2 is taken right out of that comic, but because of budget reasons there was also a lot that they just couldn't materialize on screen and the stuff that didn't make it onto the screen will literally make your jaw drop. You should definitely check it out. Miller also wrote the screenplay for this (his first), and though it's entertaining for the most part, I think it's the first 30-45 minutes that throw everything off. It doesn't start with a bang, and when OCP and the overzealous Dr. Faxx decide to implement a ridiculous amount of nonsensical directives that he must obey, the film just feels ridiculous. And that was obviously the point, but it just doesn't work. I get Miller's style, I actually love it and it comes across great in his comics, but in a serious sci-fi/action film it just came off as poorly executed at the hands of Empire Strikes Back director Irvin Kershner. Even Robocop's big entrance at the beginning when he emerges from his exploded police cruiser just feels so incredibly flat. As I watch it I see how many things could have been done to make that sequence so much more exciting. Better camera angles. Better music. Better editing. Maybe a nice tracking shot as it closes in on Robo as he emerges from the vehicle? I don't know. And it's not all just Frank Miller's and Irvin Kershner's fault, because there are a lot of hands at play when putting this thing together. I would also have to take issue with the editing. I don't know, it always just feels off throughout the entire film. Nothing ever grabs you and it never really feels exciting. Nothing "wow's" you.

But that's just the beginning. The second Robocop fries himself to get rid of all those ridiculous directives and he becomes his old self, the film definitely kicks into gear and back to a traditional Robocop type film. Not as good as the first of course, but it definitely tries and it's never silly like in that first quarter where it almost seems like it tries too hard to make you laugh. The rest of the film is hard action and violence with Robo trying to take down a drug lord named Cain (Tom Noonon) who's recently been turned into the seemingly unstoppable Robocop 2 by Dr. Faxx.

Impressive stop motion and CGI effects by 1990 standards and a decent amount of action doesn't necessarily make up for the lackluster direction, but it's a decent effort if you can get past the uneven first quarter. It's amazing how much of a different film it becomes after that scene where he fries himself and it shifts and changes pace.

Here's a link to my original review exactly a year ago to the day:
http://robotgeekscultcinema.blogspot.com/2011/07/review-robocop-2.html
Posted by robotGEEK at 7:40 PM