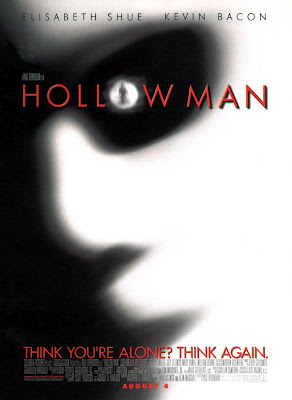 I had only ever seen this once before, when it first came out, and only because the one and only Paul Verhoeven directed it. Otherwise I probably wouldn't have bothered. For no other reason than the trailers didn't really do anything for me.

Verhoeven is an intriguing fellow. For me, he seems to possess two separate styles of filmmaking, and both couldn't look any more different than the other. The different style technique also seems to correlate between the two genre's he's most familiar with, science fiction and thrillers. With the sci-fi genre  (Robocop, Total Recall and Starship Troopers), he uses a specific type of camera, lens and look to those films. Simple, stationary and very effective when shooting action. When he's making films in the thriller genre (Basic Instinct, Showgirls, Hollow Man and Black Book), he uses a different type of camera, lens and with a much more freestyle approach incorporating a lot of steadicam shots that you wouldn't find in his sci-fi films. Less stylized and less in feeling like a Paul Verhoeven film in general. But hey, that's just my opinion. So let's move on.

I must admit, this wasn't nearly as bad or nearly as boring as I thought it'd be. For the most part, it plays really well as a straight up psychological thriller, just with a whole lot of badass special effects work thrown in. Kevin Bacon being cast as the severely conceded Dr. Sebastian Caine is probably the best thing Hollow Man has going for it too. He's utterly brilliant and pure fucking evil as the asshole scientist with a God complex. What I find fascinating is that he's not even listed as the star of this, Elizabeth Shue is, which makes no sense to me at all. This must have been after she won an Oscar for Leaving Las Vegas, because I couldn't possibly imagine how or why Elizabeth Shue gets top billing over Kevin Bacon in a film this big. I mean, Kevin Bacon "is" Hollow Man for Christ's sake!

Basic story goes as follows. Brilliant yet utterly despicable scientist is working on an invisibility serum for the military, fully funded by the government. When he finally figures out the missing piece to the puzzle after years of failure, he decides to hold that bit of info from the backers and decides to test it on himself first before they get there hands on it. He feels that once they get what they want, he and his team of scientists will be of no more use to them and his life long work will be taken away from him. The serum works, and he becomes invisible. At first, it's fun as he teases and taunts his team for kicks. And as expected, there are things not taken into consideration beforehand. Like, if you're invisible, then so are your eyelids, meaning you get no chance to close your eyes. The light hurts, and trying to sleep is virtually impossible unless you completely darken the room. But there are also side effects. The serum seems to make you go slightly insane as each day goes by. For someone as cocky (with an underlying evil waiting to escape) as Sebastian Caine, that's a very bad thing and before long, he's turning into the monster everybody knew he was capable of becoming. As he puts it, when you're invisible, you can get away with anything and nobody can stop you.

Lame marketing campaign and poster work aside, this is a really badass and solid thriller. It's a pretty much nonstop thrill ride from beginning to end with a frenetic pace, never slowing down long enough to bore you. That's a very good thing indeed. Verhoeven knows how to cut out the fluff and get to the meat of the story, and he knows we don't care about some lame romantic subplot or unnecessary backstory, we want to see Caine do some fucked up shit when he's invisible and boy does he ever. I was actually surprised at how far they went with that premise. You know, we all have that fantasy of what we'd do or which girl's bedroom we'd sneak into if we were invisible to see her naked. Only here, they take it so many steps further and in some cases, you're kind of left shocked.

The CGI work in here is also phenomenal. Yea, there are a few scenes here and there that are questionable, but for the most part it's pretty damn impressive. I mean, they go all out for the effects work in here and I don't remember the Oscars for this year, but I wouldn't be surprised if it walked away with awards for the effects work in this. Another aspect that I dearly loved is that when there is any form of violence, no matter how big or small, Verhoeven ups the anty ten fold. This is Verhoeven we're talking about and we know when it comes to onscreen violence, the guy has never let us down and he certainly doesn't here. It's awesome, and bloody, and violent. Just the way we like it.

Kevin Bacon is awesome and brilliant as the evil Sebastian Caine, and Hollow Man is bloody, violent, and goes further than you expect it to go. I woulda preferred Verhoeven's other stylistic camerawork more notable in his science fiction / action films, but that didn't take away from my enjoyment one bit.
Posted by robotGEEK at 9:45 PM