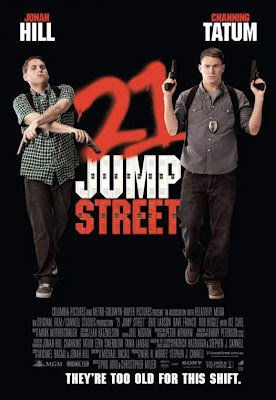 This was a nice breath of fresh air. I knew it would be good, all the feedback I've gotten back led to this assumption, but I didn't realize it was going to be this good. First off, the comedy is a lot raunchier than I was expecting. Right off the bat, you'll either be delighted or offended, depending on your taste. I loved it. It reminded me a lot of Superbad in many respects. And secondly, I knew Jonah Hill could certainly deliver, but Channing Tatum was the one who really surprised me in this. I've never really warmed up to him yet, and never thought he could really deliver the goods, or have seen anything that proved this. But this is the first time I'd ever seen him so animated and I have to say, in the confines of a raunchy comedy, he was fucking hilarious. Who knew?

I don't know about you, but when I heard they were remaking Fox's classic 21 Jump Street into an action comedy starring Jonah Hill and Channing Tatum, I was scratching my head. But you know what? It works. I hadn't laughed out loud this much from a film in a long time and honestly, that's all that really matters. I don't think they needed to call it 21 Jump Street to be honest, I think they could have given it any other name and it would have still been just as hilarious, but it's all about marketing and with a name that recognizable, it's going to draw in a lot more people into the theater.

For the most part, it's a comedy with bits of action thrown in. The action is alright, nothing impressive, but it's the ridiculous situations they find themselves in and how they ultimately deal with them in there own stupid way that keep you invested. I enjoyed it quite a bit and was just the kind of film I was needing to watch at the time to raise my spirits. Channing Tatum, apparently, can act. Jonah Hill as the straight edge between the two was hilarious. Ice Cube as the stereotypical angry black captain was great. The humor was raunchy as hell. And an awesome cameo at the end sealed the deal for me. 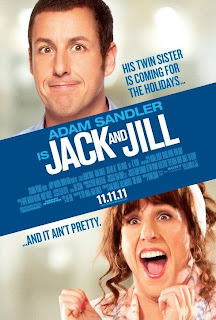 Why oh why do studio's keep giving Adam Sandler money to continuously make crap like this. I just want to go on the record as saying that I did not and had no intention of actually ever watching this, but was forced to by my 9 year old son who apparently thinks this is the funniest film he's ever seen. So much so that he got his grandfather to actually buy him the blu-ray of this.

I got nothing against Sandler personally, but it's just these severely mediocre comedies that he co-writes and releases under his Happy Madison banner with all his friends that I just can't get past. They're never very good and retain such a juvenile level of maturity that I just never enjoy them. I think the only one I ever actually liked was Happy Gilmore. For me, that one just seemed to be the best one out of his Happy Madison Productions banner. I thought it was genuinely and consistently funny and I don't know if it was intentional or not, but Carl Weathers steals the show in that one. Oh, and You Don't Mess with the Zohan had it's moments for sure. Most definitely.

Once again Sandler reteams with director Dennis Dugan (who has helmed a lot of his Happy Madison films), and offers yet another uneven, sometimes funny, sometimes sad, sometimes weird comedy about twins who don't get along when Jill (Jack's twin sister from the Bronx) comes to visit and stays unexpectedly longer to Jack's dismay. I have to say, the one and only bright spot in this whole experience is the strange casting of Al Pacino (yes, "that" Al Pacino) as an exaggerated version of himself who falls head over heels for Jill to the point of obsessiveness. I actually found it to be brilliant casting because I never in a million years would have imagined Pacino taking on a role like this. He's just so weird in this that you're constantly entertained at how odd he is as himself and how far he goes to win over the affections Adam Sandler, er.......Jill. I just remember constantly thinking "I can't believe he's doing that?!". But seriously, watching Al Pacino is the only highlight.

Is it me or are most of these productions oddly uneven? I feel the same way with a lot of these Madison films, but most recently with Grown Ups. I couldn't tell if it was trying to be a drama, or a comedy, but not done in a clever way where you could actually call it a "dramedy" either. No sir, not with these. And then there's the editing. It always feels like stuff is missing, like whole sections or sequences. I don't know if it's something that happens in the editing process or if it's just oddly written that way. But that's always bothered me about these Sandler/Happy Madison films. They look and feel like they were thrown together so quickly without much thought, planning or preparation. Like it's just an excuse for all these guys to get together again and have fun. And maybe that's all it is?

*Disclaimer: If you actually enjoyed this, don't kick my ass. This is just my opinion. Nothing else. 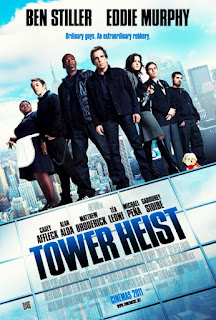 A lot of people like to hate on Brett Ratner. I'll admit, the guy doesn't really possess a "gift" for filmmaking, but he can make a decent movie from time to time. I thoroughly enjoy the first Rush Hour, and Red Dragon had it's moments. But you can never say "That looks like a Brett Ratner film". He doesn't possess any kind of definable style, much like John Landis, Gary Sherman, Andrew Davis, Herbert Ross, Christopher Cain, Geoff Murphy, etc. His type of filmmaking is just...........there. Nothing stylish or visually impressive. Tower Heist is no exception.

It's an enjoyable ensemble comedy, keeping you fairly engrossed throughout. It's just not "laugh out loud" funny, so don't go in expecting that and you'll be fine. All the players bring there A game, with Alan Alda really getting lots of screen time to shine, which really drives the movie. I don't know if it's his smarmy attitude, or that voice, but there's just something about him and his performance that really pushes this thing a little further and raises the entertainment value for me.  I didn't enjoy it as much as 21 Jump Street, and didn't laugh as much as I did in that one either, but for a lazy Sunday afternoon kinda flick, this one was pretty good. I mean, the cast alone should draw you in. Ben Stiller, Eddie Murphy, Alan Alda, Mathew Broderick, Tea Leoni, Judd Hirsh and Gabourey Sidibe (refreshingly entertaining in a comedy). Hell, even Michael Pena was fun to watch. And I think that's one of Tower Heist's strengths, that there are so many players involved that you never get bored or tired of seeing the same characters. They all have adequate screen time. Sure, the story is ridiculous and full of ridiculously implausible situations and scenarios (too many to name but ultimately get you from point A to point B much faster if you just go with it), but you just have to partly shut your brain off and things will be alright.

I'm not gonna tell you to go rush out and get it, but if you should catch yourself with nothing to watch one day and this is easily and readily at your disposal, I say watch it. Overall it was fun and you won't be sorry. There is one thing that does distract you from time to time though, at least for me anyway. And it's such a small little detail that it's not really worth mentioning because in the end, it doesn't really matter. But all I could think as I watched this was "Wow, Eddie Murphy's getting old".
Posted by robotGEEK at 10:26 PM